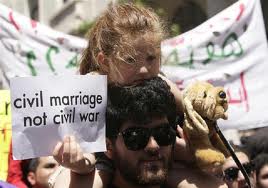 Lebanese President Michel Suleiman who is currently in Moscow on an official visit expressed on Sunday his support for a law allowing civil marriages, currently illegal in Lebanon, saying it will help build unity in the multi-faith country.

“We should work on drafting a civil marriage law. It is a very important step in eradicating sectarianism and solidifying national unity,” Suleiman wrote in Arabic and English on his Facebook page.

His views appeared alongside a photo of a man carrying his daughter on his shoulders at a rally. She is seen holding a stuffed animal and a sign reading “civil marriage, not civil war.”

Former President Elias Hrawi in 1998 proposed a similar law, which gained approval from the cabinet only to be halted amid widespread opposition from the country’s religious authorities.

Most religious faiths have their own regulations governing marriage, divorce and inheritance, and mixed Christian-Muslim weddings in Lebanon are often discouraged unless one of the potential spouses converts.

The Lebanese authorities recognize civil weddings only if they have been registered abroad, and it has become common for mixed-faith couples to marry in nearby Cyprus.

Researchers and legal experts at the Civil Center for National Initiative said on Saturday that there are no obstacles in front of civil marriage in Lebanon for those who decide to remove their sects from their IDs, LBCI television reported.

“The 1936’s law is more advanced and open than the ones adopted nowadays,” Change and Reform bloc MP Ghassan Moukheiber expressed in an interview with LBCI.

He stated: “We demand the state to take into consideration those that are not affiliated with any religion or sect”.

“The biggest challenge today is building citizenship,” he added.

Khouloud and Nidal are of course still waiting for the Ministry of Interior to officially announce their marriage, but this beats going to Cyprus where most Lebanese couples go to get a civil marriage.