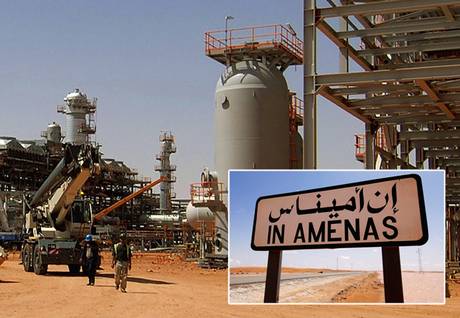 Algerian officials continue to scour a gas refinery after a bloody raid that ended a four-day standoff and left 23 capitves dead as well as 32 militants.

Algerian TV said Sunday that 25 bodies had been found inside the gas facility. Earlier Sunday, Algeria’s chief government spokesman said he feared the toll of hostages would rise as the special forces teams finished their search.

An official, who spoke on condition of anonymity because of the sensitivity of the situation, said the bodies were badly disfigured and difficult to identify.

“The bodies could be either Algerian or foreign hostages,” he said.

British Prime Minister David Cameron said Sunday three Britons were among those killed in the raid on Saturday and that another three were believed dead, as is a British resident.

“People will ask questions about the Algerian response to these events, but I would just say that the responsibility for these deaths lies squarely with the terrorists who launched a vicious and cowardly attack,” Cameron said.

“While the full scale and exact details of the situation remain unclear, Canadian officials remain in close contact with Algerian authorities to seek further information,” he said in a statement on Saturday.

“The thoughts and prayers of our entire country are with the families and friends of the innocent lives lost,” he said.

The minister said it’s believed no Canadians or dual nationals were among the hostages and a permanent resident of Canada who was at the site is safe and has left Algeria.

With few details emerging from the remote site of the gas plant in eastern Algeria, it was unclear whether anyone was rescued in the final operation, but the number of hostages killed Saturday — seven was how many the militants had said that morning they still had.

Meanwhile, at the refinery, teams continued searching for explosive traps left by the Islamist militants who took dozens of foreigners hostage.

Algerian special forces stormed the natural gas complex in the Sahara desert on Saturday to end the standoff, and the government said all 32 militants were killed.

The government described the toll as provisional and some foreigners remained unaccounted for. The siege at Ain Amenas transfixed the world after radical Islamists linked to al-Qaeda stormed the complex on Wednesday, which contained hundreds of plant workers from all over the world.

The Algerian military and its attack helicopters surrounded the complex for four tense days that were punctuated with gun battles and dramatic tales of escape.

“They had decided to succeed in the operation as planned, to blow up the gas complex and kill all the hostages,” said Communications Minister Mohamed Said, speaking on a state radio interview.

Immediately after the assault, French President Francois Hollande gave his backing to Algeria’s tough tactics, saying they were “the most adapted response to the crisis.”

“There could be no negotiations” with terrorists, the French media quoted him as saying in the central French city of Tulle. In the final assault, the remaining band of militants killed seven hostages before 11 of them were in turn cut down by the special forces, Algeria’s state news agency said.

David Plouffe, a senior adviser to President Barack Obama, said Sunday that al-Qaeda and al-Qaeda-affiliated groups remain a threat in northern Africa and other parts of the world, and that the US is determined to help other countries destroy these networks

The U.S. State Department issued a travel warning Saturday night for Americans in or traveling to Algeria, citing credible threats of the kidnapping of Western nationals. The department also authorized the departure from Algeria of staff members’ families if they choose to leave.

The military launched its Saturday assault to prevent a fire started by the extremists from engulfing the complex and blowing it up, the report added. A total of 685 Algerian and 107 foreigner workers were freed over the course of the four-day standoff, the Interior Ministry statement.

Officials said the group of militants that attacked the remote Saharan natural gas complex consisted of 32 men of various nationalities, including three Algerians and explosives experts.