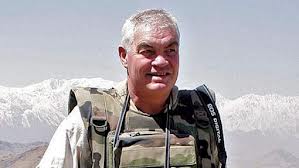 French President Francois Hollande offered condolences Friday for a French journalist slain in the Syrian city of Aleppo while reporting on the civil war there.

The journalist, Yves Debay, was covering clashes between rebels and forces loyal to President Bashar Assad when he was shot by a regime sniper on Thursday, according to the Aleppo Media Center, a network of anti-regime activists in the city. It said the sniper was positioned on the roof of the Aleppo central prison near the Museilmeh district.

Syrian rebels reportedly brought him across the border to Turkey, where a Foreign Ministry official said he was pronounced dead on arrival at the state hospital in the border province of Kilis early Friday. He had been shot in the heart, according to an initial autopsy report, the Turkish official said. The official spoke on condition of anonymity, in line with government rules that bar civil servants from speaking to journalists without prior authorization.

According to the French newspaper Le Monde, Debay was born in what was then the Belgian Congo in 1954. He joined the Belgian army but became bored and joined the white Rhodesian army, which was fighting black Marxist guerrillas.

After his mercenary period, Le Monde said, Debay “satisfied his passion for war” by writing for magazines specializing in military matters, including, finally, a magazine that he founded, called “Assault.”

But the paper called him attentive and kind, and reported that, after 30 years of reporting from around the world, he said he had learned to respect all people, regardless of their origins or ideas.

“France condemns this heinous act and expresses to the family and friends of Yves Debay its condolences, sympathy and solidarity,” Hollande said in a statement. “France pays tribute to Yves Debay and other journalists who, in Syria, pay with their lives for their commitment to freedom of information.”

Twenty-eight journalists were killed in Syria in 2012, prompting the Committee to Protect Journalists to name Syria the most dangerous country in the world to work in last year.