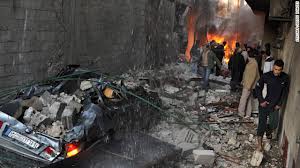 Three car bombs exploded within minutes of each other in northwest Syria on Wednesday, killing at least two dozen people in a coordinated assault on government positions, a monitoring group said.

Fighting has spread throughout much of Syria and upended civilian life in many areas as rebels have pushed to uproot President Bashar al-Assad’s better-equipped forces and tip the balance of the 22-month-old conflict.

The World Food Programme said Syria’s government had authorized it to step up food aid to some 2.5 million people going hungry, but did not say when it would be able to reach them all.

In the meantime, the war shows no signs of abating.

Car bombs at government buildings and a checkpoint in Idlib province killed at least 24 people on Wednesday – most of them members of government forces – said the Syrian Observatory for Human Rights, a British-based monitoring group.

“The car bombs exploded within minutes of each other. It seems they were coordinated,” the Observatory’s director, Rami Abdelrahman, said.

State news agency SANA said 22 people were killed in Idlib city when two car bombs exploded and said two other bombs were defused on a main road leading to Idlib.

Reuters cannot independently verify reports from inside Syria due to government restrictions on independent media.

Insurgents have often used bomb attacks to try to break a stalemate with government forces, who have far superior firepower including warplanes and ballistic missiles.

Elsewhere in the country, the Syrian military stepped up attacks in the cities of Idlib, Hama and Homs, and seized hundreds of heat-seeking missiles from militants in the southern province of Deraa, state media reported.

The armed forces renewed their assault on “terrorists” in the northern city of Aleppo and its countryside, killing dozens in the rebel strongholds of Sukari, Bab al-Hadeed and Bustan al-Qasr, SANA reported.

A day earlier, two explosions at Aleppo’s university killed at least 87 people, many of them students attending exams, in the deadliest attack on civilians to hit the commercial hub since rebels laid siege to it over the summer.

It is still unclear what caused the blasts, which each side blames on the other.

“It is clear that this was a ruthless, bloody provocation, revenge by terrorists for significant losses they have sustained in the confrontation with government forces,” the Russian Foreign Ministry said in a statement.

If confirmed, the claim would suggest rebels in the area had acquired more powerful weapons than previously used.

The deputy head of the main opposition coalition criticized Western and Arab states on Wednesday for failing to make good on promises to help the group isolate the embattled president.

“There is no real political support coming to the coalition to help isolate the regime,” he said.

World powers have shown little appetite for armed intervention in Syria. The United States on Tuesday played down a media report that chemical weapons had been used in the country – a move U.S. President Barack Obama has said would be a “red line” for Assad.

In Geneva, the World Food Programme’s Executive-Director Ertharin Cousin told reporters Syria’s government had allowed it to use dozens of additional local aid agencies to reach the 2.5 million people the WFP estimates are going hungry.

The WFP has only been able to feed up to 1.5 million people in Syria each month because of the fighting and a lack of local partners capable of delivering aid.

Cousin declined to say how long it would take to reach the additional million people.

“We are always limited by the violence regardless of how many new partners we bring on,” she said.