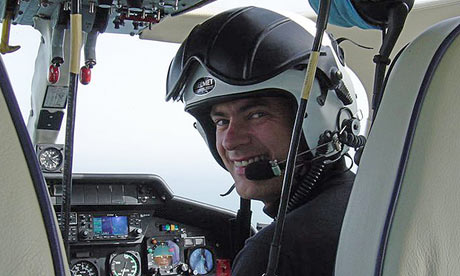 The pilot of the helicopter that crashed in central London had thousands of hours of aviation experience, including flying for films such as Die Another Day and Saving Private Ryan.

Pete Barnes, who died when the helicopter he was flying hit a crane on a high building and crashed on to a street in Vauxhall, had amassed more than 12,000 hours of flying time, including 3,500 hours on the type of aircraft he had been piloting when he crashed.

He was described as one of the country’s most experienced commercial helicopter pilots. In a wide-ranging UK career spanning 18 years, he had done everything from fly air ambulances to working as a pilot on ads, TV programmes and films including the James Bond movie Die Another Day, Saving Private Ryan and Tomb Raider II.

In 2004, he helped rescue a motorist from a flooded ford in County Durham while working for the Great North Air Ambulance. He also flew the Newcastle Traffic & Travel helicopter as the Voice of Metro FM and worked as a helicopter instructor.

Captain Barnes originally worked as a ski instructor and guide in Europe after completing his business studies degree, before going into advertising. But he later moved to the US to train as a helicopter pilot, earning a US commercial and instructors licence and going on to fly helicopters around Florida and the US east coast.

He moved back to the UK and at the time of his death was working as a freelance pilot for RotorMotion, a company that counts among its clients the Prince of Wales; the prime minister, David Cameron; the former prime minister Tony Blair, and the Dalai Lama.

On its website, RotorMotion describes Captain Barnes, who had worked for the company since 1997, as one of the country’s most experienced commercial helicopter pilots and instructor, with clients often requesting him for “both his piloting skills and his relaxed, charming manner”.