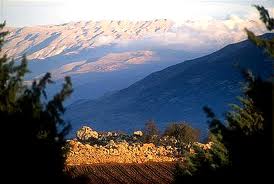 The thud of shellfire echoed in the snow-covered fields in the Bekaa Valley in the latest salvo of what Syrian rebels say is a concerted effort by President Bashar al-Assad’s army to strengthen its control of the border with Lebanon.

Gathered in an orchard close to the border, Syrian fighters said they worry they will no longer be able to supply their fighters in central Syria as the regime closes down a vital lifeline and demonstrates its tenaciousness in the face of rebel advances.

“If we don’t gather forces and target the regime on the borders and make a hole, nothing will change,” said a man who gave his name as Abdullah.

At first glance, it is not clear why the regime would send scarce resources to the Lebanese border when its biggest battles are in other parts of the country. Rebels overran a key military base in the northern province of Idlib last week, and advances they made in the Damascus suburbs last year have forced Mr Assad’s forces to use significant firepower to push them back.

But the central province of Homs, which links Damascus to the regime heartland in the Alawite coastal area of Latakia, has great strategic importance for the control of Syria. Some rebels and analysts argue it is essential to taking Damascus.

“The real battle is going to happen in Homs after the north. It’s the last front before Damascus,” said Ahmed, another fighter. “The best way to defend Damascus is blocking Homs.”

This time last year, when rebels were fighting for Homs, wounded fighters and ammunition were pouring in opposite directions through unofficial crossings on the Lebanese border. Rebels said they used to bribe Syrian border guards at checkpoints – one fighter claims you could “buy” one for $2,000 a day.

The regime has been gradually tightening its control there for several months, but rebels say that in the past few weeks Damascus has increased the number of checkpoints along the long, mountainous border, cutting off their smuggling routes.

Abu Berri, a commander with the Farouq brigade in Homs, insisted that the border was too long for the regime ever to be able to block off rebel routes across it completely, but that admitted it had become “much harder” to cross.

“Over there, I had a five-hour walk to get in,” said another man, pointing to his old smuggling route across a mountain above the fruit trees. “Ten days ago, they put people there.”

Four fighters were killed and two injured recently trying to take supplies across the border, he added.

Another fighter said that the Sunni villages on the Syrian side of the border were now deserted, and that the army had sent reinforcements along the border from irregular militias belonging to the same minority Alawite sect as the regime.

The Lebanese border has lost some of its importance to the rebels since the Turkish border came more or less under their control, and weapons are now reported to be flowing over the Jordanian border, a potential supply line in the fight for Damascus.

Nonetheless, Abdullah insisted there was “no way” the opposition could take central Syria and Damascus without at least some routes being open to Lebanon.

“[The border] will become more important as fighting gets closer to Damascus,” said Emile Hokayem of the International Institute for Strategic Studies. “The regime can still make rational decisions about its defence strategy.”

Abu Berri said rebels were trying to open up areas in Homs province and would be able to attack the border troops from the Syrian side.

“Every two to three days, there is a real battle happening,” said Ahmed, a point underscored by the shelling audible from the Lebanese side of the border.

The rebels said Hizbollah, the Damascus-allied Lebanese Shia group, was sending reinforcements for this fight. The potential for messy cross-border violations and spillover into Lebanon is high, although Lebanese army units patrolling the border have, with a few exceptions, avoided confrontation with the rebels.

For now, after a period of fighting that saw regular cross-border shelling, the regime seems to have established relative quiet on the Lebanese border itself. “They’re not even letting in the air,” said one man.