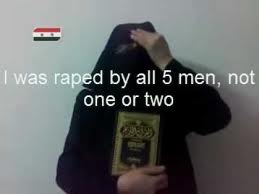 Rape is one of the primary reasons that Syrian refugees say they fled their country, “a significant and disturbing feature” of the war raging between rebels and Syrian government forces, the International Rescue Committee said Monday.

In a new report based on hundreds of interviews in Jordan and Lebanon, the assistance group said refugees recounted Syrian women and girls being gang-raped in front of their families or assaulted by armed men in public. Others were kidnapped, violated, tortured and killed, the refugee aid group was told.

The aid group did not assign blame to either side in the conflict for the reported rapes. “We deliberately do not ask about perpetrators,” said Alina Potts, Women’s Protection and Empowerment Emergency Coordinator for the group. “We’re looking at what the needs are.”

Syrian rape survivors face shame and stigma that compounds the trauma, and often inhibits them from reporting sexual violence. Many families have married off their daughters early, believing a husband could protect girls from rape. The rush to early marriages has also been reported by other groups.

“They rape girls who are as young as her in Syria now,” the father of a pregnant 14-year-old child bride told IRIN news service last year. “I will not feel OK if I do not see her married to a decent man who can protect her.”

Other girls are wed after an assault, in the belief that a marriage could “safeguard their honor,” the IRC reported. Some fear being killed by their own families if they reveal they were attacked. In one extreme case, a father shot his daughter as armed men drew near, trying to prevent the “disgrace” of her rape, the aid group was told.

Despite the continued reports of rape, help for sexual assault survivors is scant in the countries that Syrian refugees have fled to, the group reported.

“Syrian women say they feel unsafe in crowded shelters where they have minimal privacy, yet they are scared to report violence, because of shame or fear of reprisal from family members,” the report said. “Others just don’t know where to turn for help.”

The IRC said it was expanding targeted care and counseling for refugees in Jordan and Lebanon and launching similar programs in Iraq, but warned that funding from abroad hasn’t kept pace with the needs of women and girls across the region.The outpouring of refugees has also given rise to new threats of exploitation outside Syria.

“There must be safeguards to protect women from further violence…. There have been reports of people being targeted by unscrupulous landlords, saying, ‘I know you can’t afford the rent, but if you give me your daughter, your family will have a place to stay,’” Potts said.

Sexual violence is one of a long list of reported atrocities in Syria, including killings, torture and abductions. More than 600,000 refugees have poured out of Syria and millions more are believed to be in need inside the country, according to the U.N.

Aid agencies partnering with the U.N. have appealed for more than $1.5 billion to aid Syrians for six months, the biggest appeal ever made for such a crisis.

The IRC urged donors to meet the pleas for help, focusing added attention on the needs of women and girls. It also pressed for more aid for refugees living outside of the camps, who make up the bulk of the displaced yet garner less attention from media and donors. Borders should be kept open to allow more Syrians to flee, it said.