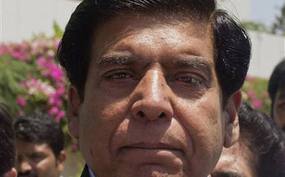 Pakistan’s supreme court ordered the arrest of Prime Minister Raja Pervez Ashraf in a corruption case on Tuesday afternoon, dramatically raising the stakes in a tense standoff between the government and its opponents.

The court order came as an enigmatic preacher turned politician, Muhammad Tahir ul Qadri, addressed thousands of supporters outside parliament and repeated calls for the ouster of the government. In earlier speeches, he said it should be replaced by a caretaker administration led by technocrats.

The confluence of the two events stoked growing speculation that Pakistan’s powerful military was quietly supporting moves that would delay general elections that are due to take place this spring, mostly likely through the imposition of a military-backed caretaker administration.

“Victory, victory, victory. By the grace of God,” Mr. Qadri said at the conclusion of a speech to his supporters who were camped outside the parliament. Others, however, suggested that the court, led by the independent-minded chief justice Iftikhar Muhammad Chaudhry, was simply taking advantage of anti-government sentiment generated by Mr. Qadri as part of its long-standing grudge match against President Asif Ali Zardari’s government.

Whatever the motivations, the court’s actions added to the chaos in Pakistan, with the stock market dropping 3 percent after word of the court’s order came down.

In the order issued Tuesday, the Supreme Court told the National Accountability Bureau, a government body that investigates graft, to arrest Mr. Ashraf and 15 other senior serving or former officials, including a former finance minister and a former finance secretary.

The case relates to long-standing allegations that Mr. Ashraf took kickbacks from a deal to build electricity power plants while serving as minister for water and power between March 2008 and February 2011. Pakistan’s energy crisis, which has seen severe electricity rationing across the country, is one of the main sources of complaints against the government.

Mr. Ashraf has denied the accusations, while Mr. Zardari’s supporters have painted the prosecution as part of a politically-tinged drive by Justice Chaudhry to unseat Mr. Zardari. Mr. Ashraf came to power last summer after the supreme court forced his predecessor, Yousaf Raza Gilani, to resign from office over another corruption-related case.

Whether there was any link between the court order and Mr. Qadri’s march on Islamabad – billed by the preacher as a “million man march” but in reality far smaller – the timing was certainly striking.

In his speech Mr. Qadri – who returned barely one month to Pakistan from Canada, where he also holds citizenship – demanded the immediate resignation of the government, and painted the country’s elected politicians as “criminals” who deserved to be prosecuted for corruption.

While stressing that he did not want a “derailment of democracy,” Mr. Qadri described the parliament as “fake” and vowed to bring a “green revolution, a peaceful revolution” in Pakistan.

“There is no Parliament. There is a group of looters, thieves and dacoits!” he said in a thundering voice, pointing to the building behind him. “Our lawmakers are the law breakers.”

In contrast Mr. Qadri offered fulsome support for the military and the supreme court, both of which have been at odds with Mr. Zardari’s government at various points in recent years. “Now only two institutions are there – the judiciary and the armed forces,” he said.

There was no immediate response from the government, whose term ends in mid-March. Under the constitution, elections are due to take place within the following 60 days.