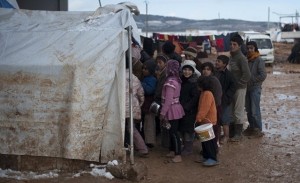 Samhan said the Saudi embassy in Jordan has begun an emergency meeting to “study” ways to distribute the wheat.

After a U.N. appeal for more assistance to Syrian refugees, Saudi Arabia decided to boost its humanitarian assistance to the 30,000 Syrians refugees in Zaatari who are battling mud and sub-zero temperatures.

Freezing temperatures and floods last week have claimed at least 11 lives across the region and exacerbated the plight of hundreds of thousands of Syrian refugees huddled in tented camps in Jordan, Turkey and Lebanon.

More than 600,000 Syrian refugees have fled to neighboring countries were exposed to the storm. Many in Lebanon and Jordan were forced to move after their tents were flooded.

Meanwhile, in addition to the Saudi assistance offered to refugees in Jordan, Samhan said that “there are also 10 helicopters heading to help Syrian refugees in Turkey.”

Ziyada’s announcement came after the Arab League held an emergency meeting in Cairo on Sunday to discuss plight of Syrian refugees.