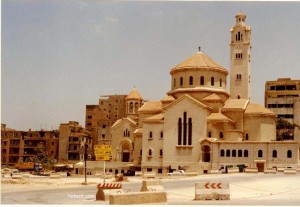 Hundreds of Armenian families fled Aleppo and headed to Beirut in order to escape the ongoing conflict in Syria between the rebels and forces loyal to the regime of president bashar al Assad.

The Armenian Churches, schools and associations reportedly opened their doors to receive the refugees and many fund raising meetings were held to help the displaced who found shelter in Lebanon and those who are still struggling in Syria. The majority of the Armenian refugees are reportedly living with their Lebanese relatives .

It is estimated that there are approximately 150,000 Armenians in Lebanon, or around 4% of the population, but their number was much higher prior to the civil war.

Photo: A renovated armenian church in the Solidere district of downtown Beirut