Geagea: The Christians reached a deal on the electoral law 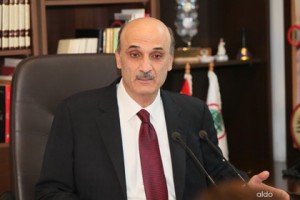 Lebanese Forces leader Samir Geagea said during a press conference in Maarab that his first preference is for an electoral law that calls for smaller districts , but if Free Patriotic Movement Leader MP Michel Aoun can convince his allies to adopt the so called orthodox gathering electoral law then he is willing to accept it too because unlike the 1960 electoral law it insures proper representation and this is what most parties really want .

He reminded Speaker Nabih Berri of his pledge to support any law the Christians agree on and added : “We have already reached an agreement”.

The law that ensures proper representation is the Orthodox Gathering law, which is in line with the Taef Accord that stipulated equal powersharing between Christians and Muslims. But this proposal was met with fierce objections, that’s why we discussed a better system, which is the law based on smaller electoral districts because it also ensures proper representation.

His remarks come after the Christian four-party panel on the electoral law agreed on Sunday to endorse the electoral law proposed by the so-called Orthodox Gathering, under which each sect would elect its own lawmakers.

The electoral parliamentary subcommittee charged with finalizing the electoral law for the 2013 elections is scheduled to convene on Tuesday after the March 14 opposition agreed to Speaker Nabih Berri’s proposal of residing in a hotel near the parliament building in downtown Beirut, as a safety precaution.

The opposition alliance had announced following the assassination of Internal Security Forces Intelligence Bureau head Brigadier General Wissam al-Hassan on October 19 that they will be boycotting the national dialogue sessions and the government’s work, awaiting Prime Minister Najib Miqati’s resignation.