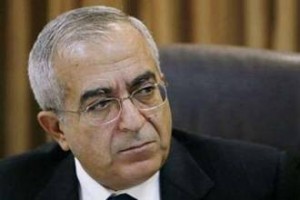 The Palestinian self-rule government is close to being “completely incapacitated,” largely because Arab countries haven’t delivered hundreds of millions of dollars in promised aid, the Palestinian prime minister said in an interview Sunday.

If allowed to continue, the Palestinian Authority’s unprecedented financial crisis will quickly double the number of Palestinian poor to 50 percent of a population of roughly 4 million, Salam Fayyad told The Associated Press.

Fayyad said the malaise is further boosting the political appeal of the Islamic militant Hamas while discrediting him and other proponents of a nonviolent path to statehood in the West Bank, Gaza Strip and east Jerusalem. Hamas seized Gaza from Fayyad’s boss, Palestinian President Mahmoud Abbas, in a 2007 takeover, leaving Abbas with only the West Bank.

The Palestinian Authority was established nearly two decades ago, as part of interim peace deals with Israel, and was meant to make way after five years for a Palestinian state alongside Israel. However, Israeli-Palestinian negotiations repeatedly broke down, at times amid bursts of violence, and failed to produce a final deal.

After the outbreak of the second Palestinian uprising in 2000, which resulted in harsh Israeli restrictions on Palestinian trade and movement, the Palestinian Authority became heavily dependent on foreign aid. It has received hundreds of millions of dollars each year since then, but has struggled to wean itself off foreign support.

“The financing problem that we’ve had … in the last few years is solely due to some Arab donors not fulfilling their pledge of support in accordance with Arab League resolutions,” Fayyad said. European countries kept all their aid commitments and the U.S. honored most, with the exception of $200 million held up by Congress last year, he added.

The crisis worsened sharply after the U.N. General Assembly voted overwhelmingly in late November, at the request of Abbas, to recognize a state of Palestine in the West Bank, Gaza and east Jerusalem, the territories Israel captured in 1967. Israel objected to the U.N. upgrade, accusing Abbas of trying to bypass negotiations.

On Sunday, Abbas declared that his Palestinian Authority would be known as the State of Palestine from now on, in keeping with U.N. recognition of Palestine as a non-member observer state in November.

Fayyad’s heftiest monthly budget item is the government payroll. The Palestinian Authority employs some 150,000 people, including civil servants and members of the security forces. About 60,000 live in Gaza and served under Abbas before the Hamas takeover, but they continue to draw salaries even though they’ve since been replaced by Hamas loyalists.

In recent months, the government has paid salaries in installments.

The Palestinian Authority already owes local banks more than $1.3 billion and can’t get more loans. It also owes hundreds of millions of dollars to private suppliers, and some have stopped doing business with the government.

Fayyad said his government is on “the verge of being completely incapacitated.” About 1 million Palestinians who depend on government salaries “are at a very serious threat of being pushed into a circle of poverty,” he said. This would double the poverty rate, which currently stands at 25 percent in the West Bank and Gaza, he said.

Fayyad said these dire consequences would happen in “short order,” but he would not give specifics.

The deputy chairman of the 22-nation Arab League, Mohammed Sbeih, acknowledged Sunday that the Palestinian Authority is in a “critical situation.” He said the head of the league has written to member states urging them “to pay the pledged $100 million.”

The growing hardships have sparked repeated protests in the West Bank. Civil servants have held several warning strikes. On Sunday, the union decided to step up protests, calling for four days of strikes over the next two weeks.