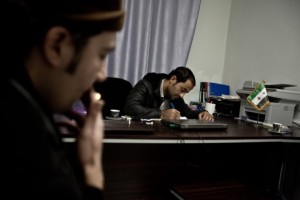 The young man sitting before lawyer Musa Amhan pulled out a small red notebook filled with names he had compiled of neighbors who had spied on residents and reported suspicious acts to Syrian intelligence.

The bicycle repairman rode into the neighborhood on a tank when security forces came to arrest protesters. The egg merchant set up a checkpoint to search cars for weapons. One bully extorted money by threatening to identify his neighbors as anti-government rebels.

His own uncle, the young man said, turned him into security forces who interrogated and tortured him.

Across Syria and in neighboring Turkey, a small group of lawyers is quietly collecting testimony from Syrians victimized by the vast network of intelligence services that the government has used against the rebellion. They have relayed accusations to rebel-established courts in three Syrian provinces, which have issued more than 140 arrest warrants, most for war-related crimes.

The lawyers hope the written accusations will eventually be used against senior government officials in an international court, and they say the outstanding warrants include one for President Bashar al-Assad. Most, they expect, will be tried in Syrian courtrooms.

The lawyers hope the written accusations will eventually be used against senior government officials in an international court, and they say the outstanding warrants include one for President Bashar al-Assad.

It is unclear whether the warrants, let alone the courts, have any authority in a country still officially ruled by Assad and where the entire legal system is likely to be overhauled if the regime falls. But the lawyers say that to wait for a transitional government would be to invite more summary executions.

“Our purpose is to prevent revenge killings,” said Ali al-Azir, one of about 300 attorneys in the Free Syrian Lawyers Committee. “The best way to do that is to arrest the responsible persons, put them in prison and have them answer to the law.”

The committee says rebel military councils in the three provinces agreed to order soldiers to abide by the warrants and to detain people picked up at rebel checkpoints until they can be tried.

Violence is hard to assess

It is difficult to judge the degree to which that is happening in the chaos of a brutal war in which Syrians on both sides have scores to settle. On top of the violence associated with the government, several YouTube videos purport to show slayings of people captured by rebel troops.

In one recent video, for example, rebels executed a man identified as a Syrian army sergeant even though he was wearing a running suit, not a uniform. In the video, the rebels claim that the man shot another man and a child, and they briefly argue among themselves about whether to kill their unarmed captive. It ends with the suspect begging for his life, then crumpling to the ground in a hail of gunfire.

It is unlikely that regime supporters would turn to a rebel-established court, but for now the lawyers’ depositions are creating a conduit for Syrians who say they were arrested and tortured by the government for their dissent and who have never had an outlet to strike back.

“Why shouldn’t we judge these criminals?” Amhan said. “Under Syrian law, it’s not an excuse if you did something illegal because you feared retaliation against your family. People should have refused these orders.”

Ahmed Hassoun, the head of the lawyers committee, said the committee has asked the opposition government in exile to grant amnesty to those judged to have been part of the government security apparatus but who never killed anyone.

The lawyers committee was formed shortly after the uprising began. For lawyers who had heard about injustices for years and felt impotent, the cause took on increased urgency as their colleagues disappeared.

“Many lawyers have been arrested since the beginning of the uprising,” said Azir, who specialized in international commerce law. “In the name of our colleagues, it is up to us to document what has happened.”

The lawyers collect testimony at refugee camps, including one in Turkey that is sheltering military officers who defected.

They are looking for the names of pilots who dropped bombs on civilian targets, officials who ordered massacres and supervisors who oversaw interrogations using torture, as well as evidence of bribery, corruption and rape.

They rely on existing Syrian law. Opening a book of the penal code at random, the manager of the lawyers’ office explained that the penalty for bribery is five years of hard labor plus a fine of three times the accepted bribe.

But finding an existing law that would criminalize behavior done at the behest of the existing government is not a straightforward matter.

“If someone was a spy working with intelligence as an informer, we don’t have a clear sentence,” Azir said. “But if the collaboration led to torture, we can make a case.”

About 40 Syrian lawyers are taking testimony from witnesses in Turkey, and the committee plans to open offices in Lebanon and Jordan, which also have large refugee populations. The rest are in Syria.

In the southeastern Turkish city of Antakya, the lawyers’ office is in a nondescript apartment building with no sign on the door to indicate that, inside, tales of broken lives are haltingly unraveled.

The young man who came to the office on a recent day said his name was Salam, and he agreed to allow a reporter to sit in on his testimony on the condition that his full name not be published, out of concern for the safety of his family in Syria.

Salam, 27, said he was studying food science at Aleppo University and hoping to find work in a food factory. When the uprising began almost two years ago, he soon joined the protests.

He said he was arrested last year on five counts: demonstrating without a permit, defaming the state, undermining the national unity of Syria, belonging to a banned organization and spreading lies. He was held for one month.

During interrogation, he said, a particularly brutal captain beat his legs with a plastic hose, shocked his arms with an electrical prod and kicked and punched him in an effort to extract information on other protesters.

Salam said he was questioned about incidents that he had mentioned only to his uncle.

A family member later approached Salam’s father and extracted a promise not to kill the uncle who apparently reported Salam.

“I couldn’t kill him with my own hands,” Salam said of his uncle. “But if someone else did it, I’d be happy.”

Salam said he was convicted and sentenced by a sympathetic judge to one month for time served. He eventually returned to school, passed his final exam and, the next day, left for Turkey.

Amhan asked Salam to sign a form outlining his allegations and said he would ask the judges to issue an arrest warrant for the captain.

“If we get lucky to catch this animal, I’m sure we will arrest him,” Amhan said.

Then Amhan paused, and spoke not as a lawyer dedicated to preventing revenge killings but as a man who has heard dozens of similarly harrowing tales and who harbors his own desires for retribution.

“Part of me hopes the FSA [Free Syrian Army] will execute him on the spot,” he said. “People like him deserve death 100 times.”

Photo: Musa Amhan of the Free Syrian Lawyers, right, records allegations of abuse made against the Syrian regime. Click through for more photos of Syria’s 21-month conflict.