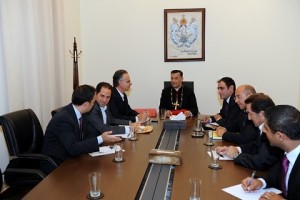 The Christian four-party panel  on the electoral law on Sunday agreed to endorse the electoral law proposed by the so-called Orthodox Gathering, under which each sect would elect its own lawmakers, LBCI  reported on sunday .

The electoral  parliamentary subcommittee  charged with finalizing the electoral law for the 2013 elections is scheduled to convene on Tuesday after the March 14 opposition agreed to Speaker Nabih Berri’s proposal of residing in a hotel near the parliament building in downtown Beirut, as a safety precaution.

The opposition alliance had announced following the assassination of Internal Security Forces Intelligence Bureau head Brigadier General Wissam al-Hassan on October 19 that they will be boycotting the national dialogue sessions and the government’s work, awaiting Prime Minister Najib Miqati’s resignation.

Jumblatt and his PSP MPs favor the current 1960 winner take all electoral law.

But Hezbollah which currently dominates the cabinet as well as the maronite Patriarch reject the 1960 electoral law.