Assad ignores demands for him to step down 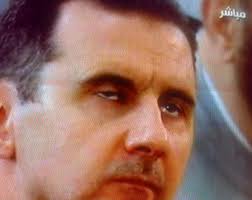 Assad ignored international demands for him to step down and said he is ready to hold a dialogue with those “who have not betrayed Syria.”

Syrian opposition forces, including rebels on the ground, are likely to reject Assad’s proposal. They have repeatedly said they will accept nothing less than the president’s departure, dismissing any kind of settlement that leaves him in the picture.

“We are in a state of war. We are fighting an external aggression that is more dangerous than any others, because they use us to kill each other,” he said.

He stressed the presence of religious extremists and jihadi elements among those fighting in Syria, calling them “terrorists who carry the ideology of al-Qaeda” and “servants who know nothing but the language of slaughter.”

Assad was speaking Sunday in a rare address to the nation, his first since June. He spoke to a packed hall at the Opera House in central Damascus, and the audience frequently often broke out in cheers and applause.

Wearing a suit and tie, the president spoke before a collage of pictures of what appeared to be Syrians who have been killed since March 2011.

The Internet was cut in many parts of Damascus ahead of the address, apparently for security reasons.

As in previous speeches, Assad said his forces were fighting groups of “murderous criminals” and jihadi elements and denied that there was an uprising against his family’s decades-long rule.

He struck a defiant tone, saying Syria will not take dictates from anyone but urged Syrians to unite to save the country.

“The first part of a political solution would require regional powers to stop funding and arming (the rebels), an end to terrorism and controlling the borders,” he said.

He said this would then be followed by dialogue and a national reconciliation conference and the formation of a wide representative government which would then oversee new elections, a new constitution and general amnesty.

However, Assad made clear his offer to hold a dialogue is not open to those whom he considers extremists or carrying out a foreign agenda.

“We never rejected a political solution … but with whom should we talk? With those who have extremist ideology who only understand the language of terrorism?” he said.

As in previous speeches and interviews, he clung to the view that the crisis in Syria was a foreign-backed agenda and said it was not an uprising against his rule.

“Is this a revolution and are these revolutionaries? By God I say they are a bunch of criminals,” he said.