Dialogue in Lebanon is not dead, minister 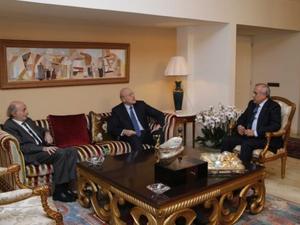 Lebanese Environment Minister Nazem al-Khoury said that the cancellation of the national dialogue session that was scheduled for January 7 does not mean that dialogue in Lebanon is dead.

“The decision made by President Michel Suleiman to cancel the dialogue session does not at all mean the end of dialogue,” Khoury told Al-Manar television on Saturday.

The minister who represents President Suleiman in the cabinet also told the Hezbollah television station Al Manar that “everyone agrees on the necessity of having the parliamentary elections on time”.

Suleiman’s decision comes despite repeated calls on the March 14 leaders to attend the Jan 7 , but the March 14 group insisted on refusal to attend any meetings that include government representatives as long as the current pro-March 8 cabinet remains in power.

March 14 made the boycott decision in the aftermath of the October assassination of Intelligence Chief Brig. Gen. Wissam al-Hassan, for which Syria and Hezbollah were blamed

Future Movement MP Nabil De Freij said Saturday the March 14 group should not be blamed for boycotting Dialogue sessions, saying a return to the talks would not ease political tension in the country.

“No party can blame March 14 for boycotting this dialogue because items that were agreed on during last dialogue sessions were not respected,” De Freij told Voice of Lebanon radio station.

He was referring to the Baabda Declaration adopted by rival leaders in one of last year’s sessions which stipulates that Lebanon should be at a distance from regional conflicts particularly events in Syria.

“A return to Dialogue will not contribute to easing political tensions because Hezbollah’s decision to use arms is not up to Hezbollah chief Sayyed Hassan Nasrallah but is a foreign decision and Hezbollah violated the Baabda Declaration when it launched the Ayyoub drone,” he added.