US Troops in Turkey to man the Patriot Missiles 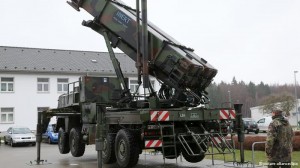 The U.S. military says troops are arriving in Turkey to man Patriot missiles there.

Germany, the Netherlands and the United States are deploying two Patriot surface-to-air batteries each to boost NATO ally Turkey’s air defenses against any possible spillover from Syria’s civil war.

More than 1,000 troops from the three nations are to be based in Turkey to operate the batteries. NATO says the Americans will be based at Gaziantep, 50 km (31 miles) north of Syria.