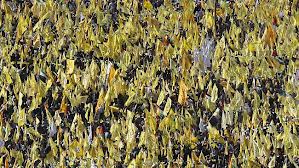 Leaders of the Palestinian Fatah party led tens of thousands of supporters Friday in a mass rally in the Gaza Strip, the first such gathering in the territory since Hamas seized power in 2007.

The demonstration, which was condoned by Hamas, showed how the long-bitter relations between the rival Palestinian factions have improved since an Israeli assault on the Gaza Strip in November.

While Friday’s rally pointed to the improving ties between Hamas and Fatah, it also served as a reminder of the conflicts within Fatah that continue to dog the movement: Officials cancelled the event halfway through after 20 people were injured due to overcrowding, and shoving matches erupted between separate Fatah factions.

Yahiya Rabah, a top Fatah official in Gaza, said the rally was cancelled “due to the huge number of participants and logistical failures.”

But witnesses said one pushing match was between supporters of Palestinian President Mahmoud Abbas and partisans of former Fatah’s former Gaza security commander Mohammed Dahlan, who was expelled from the party because of conflicts with Abbas.

Another Fatah official, who spoke anonymously because he did not want to embarrass the party, said the rally was cancelled because hundreds of Dahlan supporters jumped up on the stage and clashed with Abbas supporters.

Fatah spokesman Fayez Abu Etta attributed the injuries to overcrowding and the excitement of the rally.