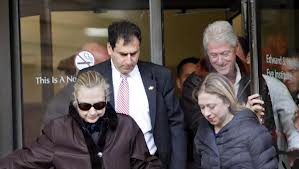 Secretary of State Hillary Clinton was discharged from a New York hospital on Wednesday after being treated for a blood clot near her brain and her doctors expect her to make a full recovery, the State Department said.

Clinton, who has not been seen in public since December 7, was at New York-Presbyterian Hospital under treatment for a blood clot behind her right ear that stemmed from a concussion she suffered in mid-December, the department said on Sunday.

The concussion was the result of an earlier illness, described by the State Department as a stomach virus she had picked up during a trip to Europe that led to dehydration and a fainting spell after she returned to the United States.

“Secretary Clinton was discharged from the hospital this evening. Her medical team advised her that she is making good progress on all fronts, and they are confident she will make a full recovery,” Philippe Reines, a deputy assistant secretary of state, said in a statement.

Reines said Clinton was “eager to get back to the office.”

Earlier, State Department spokeswoman Victoria Nuland told reporters at her daily briefing Clinton had been talking with her staff by telephone and receiving memos.

Clinton also spoke to two foreign officials – the U.N. envoy on Syria and the prime minister of Qatar – on Saturday, the day before the State Department disclosed the blood clot and her stay at the hospital.

In a statement released by the State Department on Monday, Clinton’s doctors said she was being treated with blood thinners and would be released from the hospital once the correct dosage had been determined.