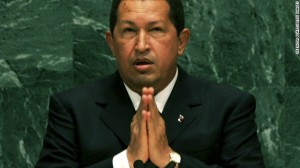 As rumors about Venezuelan President Hugo Chavez’s health swirl, supporters and opponents of the ailing leader are trading barbs over who is behind them.

“Secrecy is the source of the rumors that increase uncertainty and cause anguish,” opposition leader Ramon Guillermo Aveledo told reporters Monday, calling on the government to release more details about Chavez’s current health situation and his prognosis.

Chavez, 58, has not been seen publicly since he underwent cancer surgery in Cuba more than three weeks ago. Government officials have said he’s suffering from complications connected to a respiratory infection, but they have not revealed additional details or specified the type of cancer he has.

“Our demand that they tell the truth is elemental, and that’s due to the fact that when the sick person is a head of state who was just re-elected for a new term, there are implications that affect the entire nation,” Aveledo said.

In an interview with the teleSUR network broadcast on state television Tuesday night, Venezuelan Vice President Nicolas Maduro called on Venezuelans to “vaccinate themselves” against vicious rumors.

Maduro said government officials have provided regular updates about Chavez’s health and would continue to do so.

The Venezuelan president is “absolutely aware of the complexity of his post-operative state,” Maduro said, “and he explicitly told us that we should keep the people informed always, always with the truth.”

Chavez was in stable condition Wednesday, according to a Twitter post from his son-in-law, who is also Venezuela’s technology minister.

Concern and speculation over Chavez’s health reaches beyond Venezuela’s borders.

On Wednesday, Bolivian President Evo Morales — a close Chavez ally — said he had tried to reach out to Maduro to find out how Chavez is doing.

“The situation is very worrisome,” he said, according to Bolivia’s state-run ABI news agency. “I have already spoken with the family. I have tried to communicate with the vice president. It has been difficult, but I hope our prayers … can be effective in saving the life of the brother President Chavez.”

“The rumors are growing in Havana over the health condition of Hugo Chavez,” Yoani Sanchez wrote. “Even though we are accustomed to secrecy, we are not stupid.”