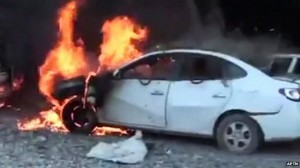 Dozens of people have been killed by an air strike on a petrol station in the outskirts of the Syrian capital, Damascus, activists say.

Unverified reports from activists suggested 70 people had been killed.

The UN’s human rights chief said a new study suggested more than 60,000 had died since the start of the uprising, many more than activists have claimed.

Navi Pillay said in a statement that the number of casualties was “truly shocking”.

The reported death toll ranged from about 30 to 70. The figures could not be verified.

One activist told Reuters news agency that the warplane had attacked the petrol station as a consignment of fuel arrived.

The BBC’s Lina Sinjab in Damascus says Mleiha is not an opposition stronghold, and civilians appear to have borne the brunt of the attack.

Many of the killed or injured are women and children, she says.

Syria is in the grip of chronic fuel shortages, and motorists often wait for hours in queues at petrol stations.

Activists told the Associated Press that a single missile had struck the station.

The strike sparked a huge explosion that engulfed vehicles that had been waiting in line.

“Given there has been no let-up in the conflict since the end of November, we can assume that more than 60,000 people have been killed by the beginning of 2013,” she said.

Opposition groups had put the figure at 44,000.

It is not clear whether the UN figures also included military personnel.