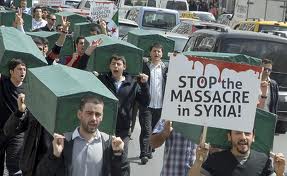 The New Year brought Syrians the same intense carnage they’d been living through for the last 21 months — and a reminder just how bloody the past year was.

In the early hours of 2013, clashes and shelling raged in eight Syrian provinces, the Observatory reported Tuesday. The heaviest fighting befell the flashpoints of Damascus and its suburbs as well as Aleppo, a city already in ruins.

Syria uses the Western calendar and usually celebrates the New Year. January 1 is a national holiday.

Across the border at a refugee camp in Turkey, Syrians have one unified wish for 2013 — the fall of the Assad government and an end to the war.

A refugee uprooted herbs by the side of the road, collecting them for a meal.

“Bashar al-Assad made us refugees,” she said. “He killed two of my children. They destroyed our homes.”

With her life in ruins, all she wants now is to be able to return to her homeland.