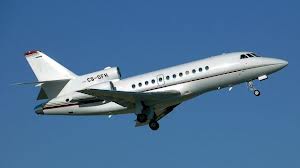 An American business plane that made an emergency landing in Iran earlier this month left an Iranian airport on Sunday after undergoing repairs, according to reports.

The Associated Press quoted Iranian state TV as saying that the plane made an emergency landing 17 days ago at the airport in the southern city of Ahvaz because of technical failure.

It was unclear why reports of the plane’s emergency landing didn’t surface earlier.

Mahmoud Rasoulinejad, head of the state-owned Iran Airports Company, told state TV that the three passengers had left Iran for Arab countries in the Gulf while the plane remained for repairs. It took off on Sunday once the needed spare parts arrived, the AP reports.

The U.S. and Iran are at odds over Iran’s controversial nuclear program.

But Iran is a member of the International Civil Aviation Organization, or ICAO, which requires it to come to the aid of civilian aircraft when requested, the AP reports.

Another report by state TV identified the American aircraft as a Falcon-900 plane with one passenger and two crew members. The plane had been bound for Rotterdam in the Netherlands from Abu Dhabi in United Arab Emirates, according to the report.