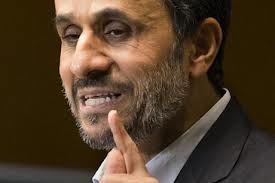 Iranian President Mahmoud Ahmadinejad has again spoken out against the use of pressure to impose Islamic values on people, especially university candidates, media reported on Monday.

“You cannot impose things by issuing decrees and directives — a choice imposed by force has no value whatsoever,” Ahmadinejad said in a speech on Sunday.

He also criticised criteria on the selection of university candidates, citing the case of a student denied university admittance in the 1980s because he had shaved. Being unshaven in Iran is a sign that you are a good Muslim.

Ahmadinejad also mentioned another case of a girl refused a university place because she had “talked to a boy in the street and had her headscarf back an inch,” thereby showing her hair.

He said that after he intervened in both cases they were granted places.

Ahmadinejad also denounced some of the questions posed to candidates during interviews for government jobs.

“We have asked people if they drank alcohol or have illicit sexual relations. This is an insult and goes against religion,” he said.

Ahmadinejad, whose second and final presidential term ends in 2013, has repeatedly drawn the ire of ultra-conservative religious figures in the Islamic republic by advocating a more liberal view of Islam, criticising in particular the use of force to compel women to cover their hair.