She pushed him to death because she thought he was Muslim! 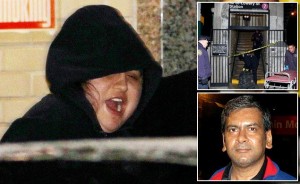 A woman who told police she shoved a man to his death off a subway platform into the path of a train because she hates Muslims and thought he was one was charged Saturday with murder as a hate crime, prosecutors said.

Erika Menendez was charged in the death of Sunando Sen, 46, who was crushed by a train in Queens on Thursday night, the second time this month a commuter has died in such a nightmarish fashion.

“I pushed a Muslim off the train tracks because I hate Hindus and Muslims ever since 2001, when they put down the twin towers, I’ve been beating them up,” Menendez told police, according to the district attorney’s office.

On Dec. 3, another man was pushed to his death.

A photo of the man clinging to the platform was published by the New York Post, causing an uproar about whether bystanders should have tried to help him rather than take pictures.

A homeless man has been charged with murder.