Syria’s Assad is scared and Isolated as regime crumbles 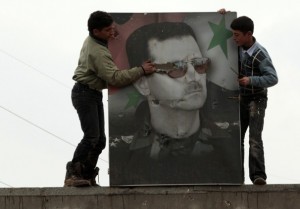 His official portrait still refers to Bashar al-Assad as “The Hope” of the Syrian nation, but signs are increasing that the man who presides over Syria’s embattled government has little of it left for himself.

Accounts of conditions inside the Syrian regime in recent days have shed new light on the psychological toll of the nearly two-year-old civil war on Assad, depicting the Syrian leader as isolated and fearful as his regime appears to be on the verge of crumbling around him.

After months of nearly continuous setbacks for his government, Assad all but vanished from public view in recent weeks, giving no interviews or speeches and making no “live” appearances on state-run television. U.S. and Middle Eastern officials now say Assad is nearly as invisible within the shrinking world of his presidency, restricting contacts to a small circle of family members and trusted advisers.

Forgoing any public effort to rally his beleaguered forces, Assad has focused on his personal safety, according to analysts and news accounts.

Syrian media and activist accounts recorded the shift, describing the president increasing his security detail, moving to a different bedroom each night and tightening controls over food preparation to thwart would-be assassins. The reports could not be independently confirmed.

Moreover, Middle Eastern intelligence officials, citing accounts from defectors that could not be verified, say Assad has ceased going outdoors during daylight hours, apparently out of fear that he will be hit by a sniper’s bullet or other fire.

“His movements suggest a constant state of fear,” a Middle Eastern official said on the condition of anonymity to discuss sensitive intelligence.

Assad’s words, however, continue to convey a resolve to remain in power. In his last televised interview in early November, the Syrian president vowed to “live in Syria and die in Syria.”

He showed no change of heart and little willingness to compromise during private meetings with U.N. officials who traveled to Damascus this week to discuss a plan for a transitional government. Officials briefed on the meetings said Assad appeared poised and confident.

Even as the U.N. sessions were underway, Syrian diplomats were being dispatched to Moscow — one of Assad’s few remaining allies — to discuss prospects for a cease-fire amid increasing signs that Syria’s armed forces are nearing collapse in many parts of the country in the face of increasingly effective rebel assaults.

Previous efforts to negotiate a settlement have foundered, but some Russian and U.N. Security Council officials expressed cautious optimism about the latest round of talks even as the rebel advances raise questions about whether they would accept anything short of outright victory.

“Things appear to be moving very quickly,” said a U.N.-based official, who spoke on the condition of anonymity because he was not authorized to discuss the matter. “Events on the ground might sort things out before things are sorted out in the council or in capitals.”

U.S. officials declined to discuss the mood within Assad’s inner circle, but one senior official with access to intelligence reports said the rebels’ steady advance on Damascus was having an inevitable impact.

“Assad may still believe Syria is his, but the psychological strain of struggling against a determined and resourceful foe has to be taking its toll,” said the official, who spoke on the condition of anonymity in discussing intelligence.

U.S. officials say the sense of isolation within the presidential palace has been reinforced by new defections — most recently by the chief of Syria’s military police — as well as moves by Syria’s few remaining allies to distance themselves from the 47-year-old dictator. In a major psychological blow, Russian President Vladi­mir Putin last week said Russia was “not concerned with the fate of Assad’s regime.”

“Putin’s comments hit particularly hard,” the Middle Eastern intelligence official said. “With the Russians pulling back, there’s increasingly a feeling that the ship is sinking.”

The concerns about personal safety for Assad and his staff also have been reinforced by a string of attacks targeting top regime officials. A rebel bombing of a secret cabinet meeting in July killed three of Assad’s senior security advisers, including his brother-in-law, who was the deputy defense minister. 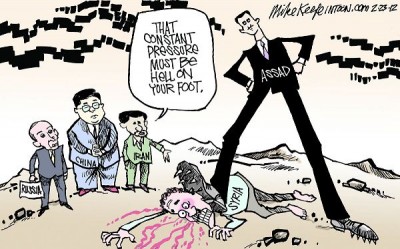 The regime also has suffered setbacks on the battlefield, as its forces lose ground across all but two of the country’s 14 provinces. Military analysts say Syrian troops are being killed at a rate of about 1,000 a month, and even elite units appear to have lost the ability to mount sustained offensives.

“The most likely prospects are for the regime’s position to deteriorate further, perhaps dramatically, in the weeks ahead,” said Jeffrey White, a former military analyst for the Pentagon’s Defense Intelligence Agency.

As the regime’s control appears to slip, Assad is relying on an ever-shrinking circle of aides — almost all of them members of his Alawite sect. U.S. and Middle Eastern analysts say the inner-sanctum is made up of hard-liners, including some who seem determined to hold on until the end.

Like Assad, the president’s advisers have shown no hint of willingness to compromise, said Andrew Tabler, author of “In the Lion’s Den,” a book about the Assad regime. Indeed, despite repeated efforts by Western governments to woo away regime officials, “there have been no major defections by senior Alawite officials,” Tabler said.

Since the start of the conflict, various experts have predicted that Alawite leaders eventually would abandon Assad or, conversely, that the president would betray his kinsmen for the promise of safe refuge in exile. Neither prediction has come to pass, even as the regime suffers losses of territory, troops, resources and — it would seem — hope.

“Assad’s levers of influence are fraying and his reach is contracting, but the regime core is a tough nut that doesn’t seem to be cracking just yet,” the senior U.S. official said. “Although pressure is mounting, it’s difficult to say when the breaking point will come because there’s little to suggest that Assad is a cut-and-run kind of guy.”

Photo: Two boys tear a poster of Syria’s President Bashar al-Assad at the army base at Hawa village, north Aleppo.