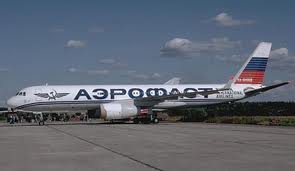 A Russian passenger plane has crashed into a main road after overshooting a runway at a Moscow airport, killing two people, police say.

Officials said up to 12 people were on board the Tupolev-204, which had the flight number RWZ9268 and was landing at Vnukovo airport.

Images of the scene show the aircraft split into several pieces, with the cockpit on the road and the fuselage across the perimeter fence.