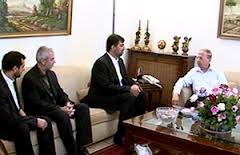 “There is a convergence in our points of view especially with regard to the military confrontations that have reached a dead end,” Abadi was quoted as saying by the National News Agency on Friday following a meeting with Aoun.

Aoun is closely allied with the Iranian and syrian backed Hezbollah militant group , while Iran is the strongest ally of Syria.

Syria, is witnessing an a pro democracy uprising against the regime of President Bashar al-Assad, which has so far killed more than 44,000 people, mostly civilians , since its outbreak in March 2011.