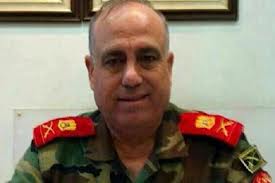 In what could be one of the highest-level defections from the Syrian government, the country’s military police chief has reportedly left Bashar al-Assad’s forces to join “the people’s revolution.”

In a video posted online this week, a man identified as Maj. Gen. Abdul Aziz Jassim al-Shallal announced his defection and said he was joining the country’s popular uprising.

“The Syrian military has strayed from its core mission in protecting the homeland to become nothing but armed gangs that kill and destroy the cities and the villages, carrying out massacres against our innocent civilian population that came out demanding freedom and dignity,” he said.

Al-Shallal had been plotting his escape to Turkey for weeks with the help of rebels, said Louai Miqdad, a spokesman for the rebel Free Syrian Army.

“The last three hours of al-Shallal fleeing the borders were on a scooter. This is how hard things can get when it comes to the coordination of the defections of some of the Syrian officers and how the FSA works hard to guarantee their safety and the passageway of their families,” Miqdad said from Turkey.

But if the military police chief did defect, it would be only the latest in a rash of high-profile defections from al-Assad’s government.

And at just one military base outside Aleppo, about 250 soldiers have defected since the Syrian uprising began last year. Most of them have joined the opposition.

The defections, combined with recent gains by rebels in various battlegrounds across the country, suggest that al-Assad is losing his grip on a country that his family has firmly commanded for more than 40 years.

But the president has given no indication that he will step down.

The Syrian Arab News Agency also said the military was ready “to confront the aggression and continue its crackdown on the remnants of terrorists until ridding the homeland of their evils.”

But Miqdad, the rebel spokesman, said it’s in the best interest of Syrian officials to follow al-Shallal’s lead.

“We would like to warn everyone who is serving in the Assad military: This is it. The time is near, and the FSA and the Syrian revolution are shifting the balance of power. If they don’t defect now and denounce the regime, they will be considered to be traitors and they will have to face trial for the crimes that their troops committed against our people,” he said.

“We urge them to defect now and join the revolution, or it will be too late.”

On the ground: Fierce battles for critical areas under way

Months of intense fighting over the city of Maaret al-Numan and the Wadi al-Deif military base came to a head Wednesday, with rebels making an elevated push for control of key government areas, dissidents said.

“If the rebels manage to take over the Wadi al-Deif base and Maaret al-Numan, it could be a severe blow to the regime in the north because it will give the rebels the upper hand in controlling the entire Aleppo-Damascus highway,” said Rami Abdulrahman, director of the opposition Syrian Observatory for Human Rights.

He said such victories would be a major strategic gain because rebels would be able to cut off all the reinforcements to regime forces in Syria’s largest city and commercial hub, Aleppo.

“Wadi al-Deif is considered to be the main fuel storage for the regime forces and the largest military base in Idlib province. If the rebels managed to cut off the road by taking over the base and the security checkpoints that surround it, the opposition fighters would cripple the regime forces’ ability to mobilize their forces not only in Idlib, but in Aleppo as well,” Abdulrahman said. “Hundreds of regime forces will be left in disarray to fight on their own without any reinforcement, fuel or food supplies.”

By late Wednesday morning, rebels had announced “the start of the liberation” of Maaret al-Numan, the opposition Local Coordination Committees of Syria said.

Across the country, about 40,000 people — mostly civilians — have been killed in the Syrian crisis since March 2011, according to tallies by opposition activists.

At least 38 people have been killed in Syria on Wednesday, the LCC said. Of those, 21 have died in Raqqa province.