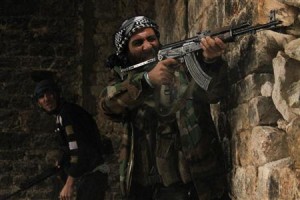 Rebels began to push into a strategic town in Syria’s central Hama province on Thursday and laid siege to at least one town dominated by President Bashar al-Assad’s minority sect, activists said.

The operation risks inflaming already raw sectarian tensions as the 21-month-old revolt against four decades of Assad family rule – during which the president’s Alawite sect has dominated leadership of the Sunni Muslim majority – rumbles on.

Opposition sources said rebels had won some territory in the strategic southern town of Morek and were surrounding the Alawite town of al-Tleisia.

They were also planning to take the town of Maan, arguing that the army was present there and in al-Tleisia and was hindering their advance on nearby Morek, a town on the highway that runs from Damascus north to Aleppo, Syria’s largest city and another battleground in the conflict.

“The rockets are being fired from there, they are being fired from Maan and al-Tleisia, we have taken two checkpoints in the southern town of Morek. If we want to control it then we need to take Maan,” said a rebel captain in Hama rural area, who asked not to be named.

Hama is home to dozens of Alawite and Christian villages among Sunni towns, and activists said it may be necessary to lay siege to many minority areas to seize Morek. Rebels want to capture Morek to cut off army supply lines into northern Idlib, a province on the northern border with Turkey where rebels hold swathes of territory.

From an offshoot of Shi’ite Islam, Alawites have largely stood behind Assad, many out of fear of revenge attacks. Christians and some other minorities have claimed neutrality, with a few joining the rebels and a more sizeable portion of them supporting the government out of fear of hardline Islamism that has taken root in some rebel groups.

Activists in Hama said rebels were also surrounding the Christian town of al-Suqeilabiya and might enter the city to take out army positions as well as those of “shabbiha” – pro-Assad militias, the bulk of whom are usually Alawite but can also include Christians and even Sunnis.

“We have been in touch with Christian opposition activists in al-Suqeilabiya and we have told them to stay downstairs or on the lowest floor of their building as possible, and not to go outside. The rebels have promised not to hurt anyone who stays at home,” said activist Mousab al-Hamdee, speaking by Skype.

He said he was optimistic that potential sectarian tensions with Christians could be resolved but that Sunni-Alawite strife may be harder to suppress.

“They come from all over, Europe and America, and especially the neighboring countries,” said Karen Abuzayd, one of the U.N. investigators, told a news conference in Brussels.

Deeper sectarian divisions may diminish prospects for post-conflict reconciliation even if Assad is ousted, and the influx of foreigners raises the risk of fighting spilling into neighboring countries riven by similar communal fault lines.

Some activists privately voiced concerns of sectarian violence, but the rebel commander in Hama said fighters had been told “violations” would not be tolerated and argued that the move to attack the towns was purely strategic.

“If we are fired at from a Sunni village that is loyal to the regime we go in and we liberate it and clean it,” he said. “So should we not do the same when it comes to an Alawite village just because there is a fear of an all-out sectarian war? We respond to the source of fire.”

President Vladimir Putin of Russia, Assad’s main ally and arms supplier, warned that any solution to the conflict must ensure government and rebel forces do not merely swap roles and fight on forever. It appeared to be his first direct comment on the possibility of a post-Assad Syria.

The West and some Arab states accuse Russia of shielding Assad after Moscow blocked three U.N. Security Council resolutions intended to increase pressure on Damascus to end the violence, which has killed more than 40,000 people. Putin said the Syrian people would ultimately decide their own fate.

Assad’s forces have been hitting back at rebel advances with heavy shelling, particularly along the eastern ring of suburbs outside Damascus, where rebels are dominant.

A Syrian security source said the army was planning heavy offensives in northern and central Syria to stem rebel advances, but there was no clear sign of such operations yet.

Rebels seized the Palestinian refugee district of Yarmouk earlier this week, which put them within 3 km (2 miles) of downtown Damascus. Heavy shelling and fighting forced thousands of Palestinian and Syrian residents to flee the Yarmouk area.

Rebels said on Thursday they had negotiated to put the camp – actually a densely packed urban district – back into the hands of pro-opposition Palestinian fighters. There are some 500,000 Palestinian refugees and their descendants living in Syria, and they have been divided by the uprising.

Palestinian factions, some backed by the government and others by the rebels, had begun fighting last week, a development that allowed Syrian insurgents to take the camp.

A resident in Damascus said dozens of families were returning to the camp but that the army had erected checkpoints. Many families were still hesitant to return.

The rebels already hold much of the terrain along Syria’s northern and eastern borders with Turkey and Iraq respectively.

They said around 20 rebels from the Qadissiyah Brigade overran the post at Rankus, which is linked by road to the remote Lebanese village of Tufail.

Video footage downloaded on the Internet on Thursday, dated December 16, showed a handful of fighters dressed in khaki fatigues and wielding rifles as they kicked down a stone barricade around a small, single-storey army checkpoint.

Syrian Interior Minister Ibrahim al-Shaar arrived in Lebanon on Wednesday for treatment of wounds sustained in a bomb attack on his ministry in Damascus a week ago.

Lebanese medical sources said Shaar had shrapnel wounds in his shoulder, stomach and legs but they were not critical.

The Syrian opposition has tried to peel off defectors from the government as well as from the army, though only a handful of high-ranking officials have abandoned Assad.

The conflict has divided many Syrian families. Security forces on Thursday arrested an opposition activist who is also the relative of Vice President Farouq al-Sharaa, the Syrian Observatory said. The man was arrested along with five other activists who are considered pacifists, it said.

Sharaa, a Sunni Muslim who has few powers in Assad’s Alawite-dominated power structure, said earlier this week that neither side could win the war in Syria. He called for the formation of a national unity government.