by Ghassan Karam
2066
by Ghassan Karam - This is the 8th installment of the book: The Lebanese Connection: Corruption, Civil War, And The International Drug Traffic by Jonathan Marshall
Share: 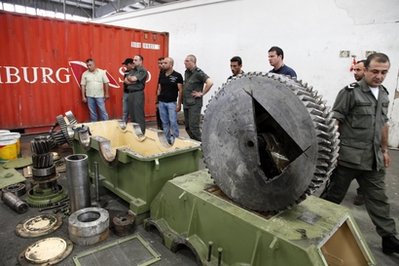 This is the 8th installment of the book: The Lebanese Connection: Corruption, Civil War, And The International Drug Traffic by Jonathan Marshall a fellow at Stanford Studies In Middle Eastern And Islamic Societies And Cultures. The book is a scholarly account of the Lebanese drug trade based on previously classified documents of The DEA and other US drug related agencies. As is expected, the illicit trade account reveals names and details regarding corruption and trafficking in which the Lebanese ruling class has played a major role. I imagine that the only reason that the book is banned in Lebanon is the attempt by politicians to keep the details of names and corruption out of circulation. The only reason for these summaries is the strong belief that in a free and responsible society transparency should be the norm. This is an attempt to bring in sunlight over what the politicians would like to stay covered up.

Illicit drug trade in Lebanon had grown to become one of the largest in the world. Revenue derived from these illegal activities dominated the Lebanese GDP and became a major source of finance for all sorts of political groups and militias. Obviously such a significant level of activities helped shape Lebanon through the various roles that the Lebanese themselves have chosen to perform in addition to the role played by the Syrian army in Lebanon besides the substantial trafficking by many Syrian nationals, the most significant of whom were the Kassars. But these were not the only major groups that took part in this type of activity. Of the numerous other players the Israelis, Palestinians, Hezbollah and the Armenians deserve special mention.

What is most surprising is that although the Israeli connection to the Lebanese drug trade has been rather strong since the creation of Israel it has managed to stay below the radar screen. One of the earliest documented connections is that Mossad had cooperated and protected the smuggling of drugs by the Lebanese drug pin Sami Khoury through Israel to Egypt. The same kind of cooperation also existed with the Bedouins who supplied both Gaza and the Egyptian market with Lebanese Gold. Access to Lebanese drugs increased as a result of the 1978 and 1982 Israeli invasions of Lebanon. One unforeseen result of the drug trade with Lebanon resulted in an explosion of drug use among the Israeli military as well as the civilian population. One official estimate places the number or regular drug users in Israel to have climbed to over 300,000 people. Lebanese drugs were no longer just transiting through Israel but many an army member traded his issued arms for drugs by claiming that they were lost. A drug bust in Tel Aviv during 1978 netted two army soldiers who gave information about their suppliers who in turn squealed on the h top of the ring, one of the three regional Army commanders. 1986 saw a major drug bust in the UK of Israeli drug dealers attempting to deliver 1.8 tons of Lebanese hash. Another major arrest took place in 1991 as the DEA agents in cooperation with Israeli police stopped an Israeli gang from transporting Lebanese heroin to Israel and from there to Europe and the US.

Many Israeli journalists pretended that the Israeli Lebanese drug connection did not exist. They instead built what amounted, in many cases, to fictitious charges against the Palestinians. One prime example can be seen in Rachel Ehrenfeld who charged the PLO of acting as a “Narco-Terrorist” organization that is bent on raising $300 million a year for the purchase of arms. Her only source was an assistant of Benjamin Netanyahu. Dennis Eisenberg was another such reporter who was willing to make unrealistic charges. He claimed that in 1990 the PLO 9 what he called Poppy Lovers Organization) that the Palestinians had smuggled that year over 300,000,000 pounds of hash. That is close to being impossible. Nathan Adams and Claire Sterling were such reporters also. They charged the “PLO purchases an estimated 40% of its light-infantry weapons with hash, heroin or morphine.

Practically all of the above had been challenged by the Sunday Times in 1986. James Adams that” [Israeli] broad accusations are a serious misrepresentation of the real situation and that there is absolutely no evidence to support the contention that this is an official PLO backed enterprise. Even Jack Anderson of the US had to express skepticism by saying that:” The intelligence data…fails to pin down [drug charges]” Even the DEA chimed in by stating that there is “no information linking the PLO to drug trade”

What can be reasonably concluded is that the PLO leadership did not feel the need or the urge to finance its activities through the drug trade since the Arab regimes were willing to provide adequate funding.

A relatively new comer to the political field of Lebanon was Hezbollah which was established in the 1980’sunder the guidance of Iran. It should not be a surprise to learn that the same Rachel Ehrenfeld had accused Hezbollah of getting a fatwa that allows them to market drugs “for Satan America and the Jews”.

Many of the other sources were more circumspect. Rafi Peled, , an Israeli chief of police intelligence stated that “Hezbollah had little involvement in the drug trade “while David Brooks of the WSJ said in 1992 that the only Lebanese militia “that is not involved in the drug trade” is Hezbollah. Even the Library of Congress concluded in a 2002 study that “the role of Hezbollah in drug production and trade in Lebanon…seems not to be of a major dimension… Hezbollah does not encourage cultivation of cannabis but tolerates it”.

There was another ethnic group that played a relatively substantial role in the promotion and distribution of Lebanese drugs although its role has also been underreported. Many seem surprised when the Armenian role is mentioned but in retrospect this appears to be a natural development. When the Armenians were forced to flee the Turkish massacres many came to Lebanon, Syria, Greece, France, Panama and the US. The resulting ethnic gangs in each of these locations acted as bridge heads for Lebanese drugs.

One Lebanese Armenian, Hagop Kevorkian, was a major drug and foreign exchange runner and a partner of the notorious Sami Khoury while many of the Marseille heroin labs were reputed to be owned by ethnic Armenians. This drug role was eventually helped by the political structure that emanated among the Lebanese Armenian community.

The Tasnaq, an anti communist party, received help from the CIA; the SAVAK in the 1960’s and was able to transform the Beirut branch of the party into a policy setting organization for the rest of the world. Both the Tashnaq and its counterpart the Hunshaq tried to avoid being sucked into the Lebanese internecine civil war But that was not to be.  ASALA; Armenian Secret Army for the Liberation of Armenia, attacked the World Council of Churches in Beirut for encouraging Armenians to emigrate to North America. ASALA also had strong relationships with Syria, plo and Abu Nidal. As a result the Tashnaq had to respond to this leftist challenge by forming the Justice Commandos Against Armenian Genocide (JCAG).

But as expected such organizations require substantial funding and both were drawn to the easy revenue from drugs. The significant drug activities can best be seen through the numerous arrests that were done by the Swedish, Danish and the French police against drug smugglers that were Lebanese Armenians. Noubar Soufian of JCAG was the most notorious and was arrested by the NY police in 1981 for smuggling Lebanese heroin to the US. Noubar Soufian managed to get back to Beirut where he became a significant arms smuggler for the Phalange and the Armenians in exchange for heroin.