M14 may accept Berri’s proposal to meet at a hotel 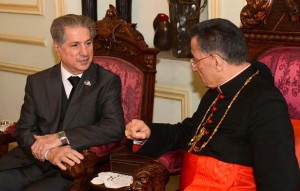 “We are doing our best to have the elections held on time.” Gemayel stressed

March 14 MP Marwan Hamadeh had told a Lebanese daily that Berri suggested that the parliamentary electoral sub-committe should hold its meeting in a safe and “well-secured” hotel, near the parliament in Beirut and not leave before an agreement is reached on a an electoral law for 2013 elections.

“March 14 MPs had told Berri that they are ready to take part in committee meetings to address the electoral law,” Zahra told Al-Joumhouria newspaper in remarks published Wednesday.

“The direction [March 14] is taking is towards accepting [Berri’s proposal].”

Zahra also said that the March 14 coalition was determined to carry out the 2013 parliamentary elections on time and to agree on a new electoral law.

Another leader in March 14 alliance was quoted as saying : we dont mind being in a 5 star jail in order to meet our parliamentary obligations but what is really required is for this government to go and be replaced by another that can put a end to the political assassinations and bring security to this country .

Parliamentary activity in Lebanon has effectively ceased since the opposition announced that it would cut all ties with the current government, which — according to March 14 — should have resigned following the assassination of Internal Security Forces’ intelligence chief General Wissam al-Hassan on October 19 in Beirut’s Ashrafieh.

The opposition has also boycotted parliamentary meetings to discuss cabinet proposals but said earlier this month that it was willing to take part in the parliament’s meetings on the electoral law for the 2013 parliamentary elections.

The new electoral law was approved by the majority of ministers, including the FPM ministers . The ministers that represent Progressive Socialist Party leader MP Walid Jumblatt’s bloc voted against it.

Even though the FPM ministers voted for the cabinet ‘s electoral law draft, FPM MPs Alain Aoun and Neemtallah Abi Nasr submitted another draft electoral law to the parliament . This is the so called “Greek Orthodox gathering proposal” which calls on each sect in Lebanon to vote only for its candidate in the elections based on proportional representation and one electoral district for the whole country .

Jumblatt and his PSP MPs favor the current 1960 electoral law.

March 14 MP Ahmad Fatfat held the cabinet responsible for the security of all politicians under threat of assassination, as he reaffirmed March 14′s call for a new neutral cabinet, naming former minister Adnan Kassar as the potential new Prime Minister.

Fatfat revealed that members of March 14 were threatened either directly or indirectly, and were asked by Minister of Interior Marwan Charbel to limit their movements until further notice.

According to observers, the current cabinet which is headed by PM Nagib Mikati is completely dominated by the Iranian and Syrian backed Hezbollah militant group which favors the electoral law that was approved by the cabinet and is insisting on rejecting the 1960 electoral law and any law that does not favor proportional representation.