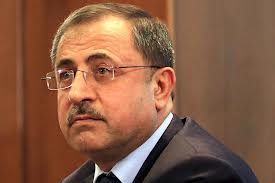 One of the doctors treating Syrian Interior Minister Mohammed Ibrahim al-Shaar at the American University Hospital in Beirut was quoted by National News Agency as saying ” “He is in a stable condition . He suffers from burns and shrapnel and will not need surgery but needs to be observed and treated.”

Shaar was admitted on Wednesday to American University Hospital in Beirut according to local media reports.

A security source told AFP on December 13 that the minister was wounded in a deadly bomb attack targeting his ministry on December 12 .

“He was wounded in the shoulder when the ceiling fell in his office,” the source said.

Future television later reported that he was in need of large amounts of blood.

This is the second time that the interior minister has been wounded in an attack.

Shaar narrowly escaped the July 18 bombing that claimed the lives of four other top security officials, including the defense minister and the brother-in-law of President Bashar Assad Assef Shawkat.