US: A historic day for black Republicans 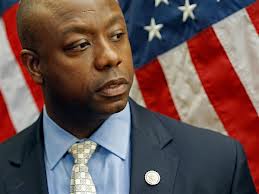 South carolina Governor Nikki Haley appointed Rep. Tim Scott to the U.S. Senate on Monday, making him the South’s first black Republican senator since Reconstruction in a state whose politics is steeped in the history of slavery and Civil War.

“It speaks to the evolution of South Carolina and our nation,” Scott, 47, said of his appointment to fill the seat vacated by Sen. Jim DeMint, a conservative who reigned his post with four years left in his second term to head a right-leaning think tank.

Haley, a daughter of Indian immigrants who became South Carolina’s first female and minority governor in 2010, acknowledged making history with her appointment, but she stressed that she picked Scott for his conservative values.

“He earned this seat for what I know he’s going to do in making South Carolina and our country proud,” she said.

Scott, 47, will be sworn in Jan. 3. Senate Republicans welcomed the appointment, which comes more than a month after Republicans’ poor performance with minorities in the election forced soul-searching in the party to broaden its appeal.

“This is truly an historic moment for the Palmetto State from a governor who’s broken more than a few barriers in her own career,” Senate Republican Leader Mitch McConnell of Kentucky said.

Sen. Marco Rubio, R-Fla., one of two Hispanics in the Senate, called Scott “a passionate, thoughtful and sincere advocate for the people of South Carolina and for limited government principles.”

Scott is certain to be front and center when Republicans talk about fiscal matters and other issues vital to the conservative base. It remains to be seen what committee assignments he will get. He had served on the House Rules Committee.

Scott’s selection culminates a fast rise through South Carolina politics. Just four years ago, he was chairman of the Charleston County Council. The 2008 election made him the first black Republican in the South Carolina Legislature in more than a century, and in 2010, he won his seat in the U.S. House from his conservative coastal district with 65 percent of the vote.

Outside the Statehouse where Scott spoke, a statue still stands of post-Reconstruction former governor and U.S. senator Ben Tillman, who unapologetically advocated lynching any black who tried to vote. Another statue depicts the late Strom Thurmond, who still holds a record for a 24-hour filibuster of the Civil Rights Act of 1957.

But Scott has never dwelled on his race.

“I’ve never heard on the campaign trail, ‘Besides the fact you’re black or because you’re black, here’s what we want of you.’ They asked me questions about values and issues, and that’s an amazing thing. It speaks to the evolution of South Carolina and our nation,” Scott said.

Scott will serve for two years and then face an election in November 2014. That would give South Carolina two Senate elections: one for Scott and the other for two-term Republican Sen. Lindsey Graham.

Scott said he still believes in term limits and would likely limit himself to two terms in the Senate, starting with 2014.

After asking for a moment of silence for the victims of the Connecticut school shooting, Scott said he accepted the challenge of trying to help the country through troubling times.

“Our nation finds itself in a situation we need backbone. We need to make some very difficult decisions,” Scott said. “I learned early in my 20s that if you have a problem with spending, there’s not enough revenue to make up for it. We have a spending problem in America.”

Scott grew up in poverty in North Charleston. His parents divorced when he was 7, and he remembered his mom working 16 hours a day to support him and his brother.

“To the single moms out there, don’t give up on your kids. It may get tough. It may be challenging, but all things are truly possible,” he said.

In high school, he said he was failing four courses and in danger of “flunking out of high school” until he met the late John Moniz, a conservative entrepreneur who ran a Chick-fil-A beside the movie theater where Scott worked.

Scott earned a degree in political science from Charleston Southern University, which is affiliated with the South Carolina Baptist Convention and touts how it integrates faith into learning and serving.

Graham, South Carolina’s senior senator, said Scott has a unique opportunity to inspire others and be a leading voice for the conservative cause.

The governor won’t name a replacement for Scott. By state law, U.S. House vacancies are filled through a special election.