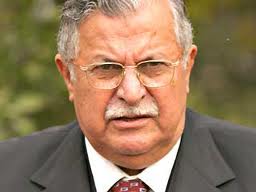 Iraqi President Jalal Talabani, a Kurd who has mediated among the country’s Shi’ite, Sunni and Kurdish parties, was in hospital on Tuesday after suffering a stroke that left him in “critical but stable condition”, government sources said.

Should Talabani be incapacitated, Iraq would lose an influential negotiator who often stepped in to ease tensions in the fragile power-sharing government and between the central government and the country’s autonomous Kurdistan region.

Talabani’s office said he was admitted to a Baghdad hospital on Monday night and the 79-year-old president was in stable condition under intensive medical supervision after receiving treatment for blocked arteries.

“He was transferred to hospital late last night after suffering a stroke,” a senior Kurdish official said.

Talabani had been suffering from ill health this year and received medical treatment overseas several times in the last two years.

Prime Minister Nuri al-Maliki visited the president at the Baghdad hospital on Tuesday.

According to Iraq’s constitution, the parliament should elect a new president if the post becomes vacant. Under Iraq’s power-sharing deal the presidency should go to a Kurd while two deputy president positions are shared by a Sunni Muslim and a Shi’ite Muslim.

Talabani recently helped ease a military stand-off between Maliki’s central government and the autonomous Kurdistan president, Masoud Barzani, in a dispute over oil-field rights and internal boundaries. Both regions sent troops to reinforce positions along their internal frontier.

A veteran of the Kurdish guerrilla movement, Talabani survived wars, exile and infighting in northern Iraq to become the country’s first Kurdish president a few years after the 2003 invasion that toppled Saddam Hussein.