Syria hands over to Lebanon remains of 4 islamists-update 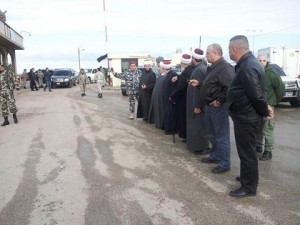 The remains of four Islamist fighters that were killed during a Syrian army ambush in Tal Kalakh were delivered to their relatives in Tripoli Sunday. The remains were handed over to Lebanon via the northern border crossing of Arida.

Nabhan and Ayoubi hailed from Tripoli and Ghoul from the northern town of Dinnieh, while Hajj was a resident of the Beddawi refugee camp. All four were buried on Sunday afternoon.

A statement from General Security issued at noon said that its chief Maj. Gen. Abbas Ibrahim would maintain his contacts with Syrian authorities, in coordination with Lebanon’s Foreign Ministry, to secure the repatriation of the remaining bodies.

Tight security measures were taken in Tripoli in the morning, with the Army deploying heavily in Nour Square, the main entrance to the city’s neighborhoods.

Four ambulances provided by Dar al-Fatwa crossed the Arida northern border into Syria to take the bodies and hand them over to Lebanese authorities. A delegation of sheikhs from Dar al-Fatwa was the first to arrive to the crossing, headed by the secretary of the organization, Mohammad Imam.

“We came here to receive and accompany the bodies of the martyrs. We hope the rest of the bodies are repatriated as soon as possible,” Imam said.

The Internal Security Forces, General Security and the Army all deployed to the border crossing.

Update: Sheikh Mohammad Ibrahim, who represents the relatives of the fighters killed in Syria told al Jamhouria newspaper on Monday that the Syria authorities promised to hand over the remains of three more fighters who were identified as : Abdel Hakim Ibrahim, Hussein Srour and Malek Deeb