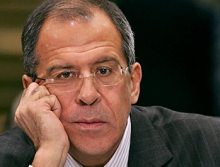 Russia backtracked Friday on comments about Syria made by a key official only a day earlier.

”There has not been any deviation from our principle line on Syrian affairs, and nor will there be in the future,” Lukashevich said. “Our only goal is to end the violence in Syria as quickly as possible, to start a dialogue between the Syrians, between the government and the opposition, and to work out a formula for advancing a political process in the future.”

Analysts have been left guessing at Moscow’s intentions. Was it simply a case of mixed signals between a diplomat and his head office? Or were Bogdanov’s comments a signal to the Syrian opposition that Russia is ready to shift its policy? Or could they have been a signal to the U.S. and Turkey that Russia is ready to take a more active role in achieving a diplomatic solution to the Syria crisis?

A grain of salt

Joseph Olmert, a Syria expert and adjunct professor at the University of South Carolina, says, Bogdanov’s comments — along with the Foreign Ministry’s subsequent clarification – were no accident. He says the Russians are likely very pleased with themselves today, because they have positioned itself back in “the diplomatic game” over Syria and Assad’s fate.

“Even clumsy Russian explanations that the statement was taken out of context should be taken with a grain of salt,” Olmert said.

“In a system of government like Russia’s, there is a ‘good and bad cop’ technique at play,” he continued. “What Bogdanov said indicates the Russians’ attempt to position themselves in line for talks about the future of Syria, post-Bashar.”

Olmert says that Moscow under Vladimir Putin is pragmatic and is clearly acknowledging the reality of the situation on the ground.

“The Russians never intended to fight for Bashar Al-Assad, and on occasions in the past they have actually distanced from him,” he said.

Olmert believes Russia’s policy all along has been to demonstrate, as it did with regard to Iran, that Moscow has a role to play and does not want to see any of what Olmert calls a “one-sided pax Americana” take place.

“I do not rule out a granting of safe passage to Bashar and his immediate family to Moscow,” Olmert said. “And surely, the Russians will seek to protect their military installations in Syria, particularly in Tartus.”

Moscow has only one naval presence in the Mediterranean — the naval supply base at Tartus, which Russia says has more symbolic than strategic value.

Too Little Too Late?

Whatever Russia does, how will the Syrian opposition feel about Moscow if Assad falls and it takes power?

Radwan Ziadeh, spokesperson for the Syrian National Council and a fellow at the Institute for Social Policy and Understanding in Washington, D.C., believes that it will be very difficult for any future Syrian government to deal with the Russians.

“We have many opposition figures and activists inside Syria who believe that Russia should be held accountable for what happened to the Syrian people. The historical relationship between Russia and Syria will come to an end,” he said.

Ziadeh says he has visited Moscow for talks on two occasions and repeated this message many times.

“But it looks as if they don’t care,” he said. “Now that the opposition is very close to Damascus, it isn’t clear if their opinion is still the same or there has been a change in their position.”

Jeffrey Mankoff is deputy director of the Russia and Eurasia Program at the Center for Strategic and International Studies (CSIS) and a visiting scholar at Columbia University in New York City. He says Russia has been trying to keep the lines of communication open with the Syrian opposition.

“But it’s been pretty clear that Russia is probably the most important and steadfast foreign supporter of Assad, apart from countries like Iran,” Mankoff said.

“So I think the Russians are now trying to make the best of what is clearly for them a bad situation,” he said.

At the end of the day, Mankoff does not rule out the possibility that Moscow will be able to strike a deal with a post-Assad government to protecting Russia’s vital interests in Syria.

But in terms of actually being able to influence and shape the post-Assad government, Mankoff thinks Russia has most certainly missed the boat.