At least one dead in shooting at Connecticut school 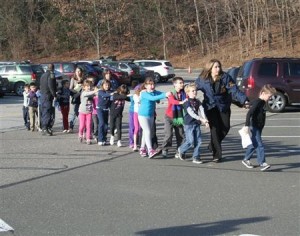 A shooter on Friday opened fire at an elementary school in Newtown, Connecticut, leading to multiple victims, the Hartfort Courant newspaper reported.

All Newtown schools were placed in lockdown after the shooting, the Newtown Public School District said.

The shooter, an adult, was dead and two handguns were recovered from the scene, NBC News reported without citing a source.

One child was carried from Sandy Hook Elementary School by a police officer, and the child appeared to have been wounded, the town’s weekly newspaper, the Newtown Bee, said on its website.

Television images showed police and ambulances at the scene, and parents rushing toward the school.

Danbury Hospital, about 11 miles west of the school, had been put on alert for possible casualties, a hospital spokesman told Reuters.

Connecticut State Police said its officers were at the scene with local police but provided no additional details. The emergency call to police occurred at 9:41 a.m., state police said.

An individual answering the phone at the Newtown Police Department declined to comment.

Newtown, with a population about 27,000, is in northern Fairfield County, about 45 miles southwest of Hartford and 80 miles northeast of New York City.

Sandy Hook serves children in kindergarten through fourth grade, roughly ages 5 to 10. It is one of four elementary schools in the district. The town also has a grade 5-6 school, a middle school and a high school.

The United States has experienced a number of mass shooting rampages this year, most recently in Oregon, where a gunman opened fire at a shopping mall on Tuesday, killing two people and then himself.

The deadliest attack came in July at a midnight screening of a Batman film in Colorado that killed 12 people.

Update: The number of dead is unclear, but there are at least 20 shooting victims.

Update: At least 27 people, including possibly 14 children, were killed