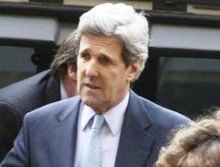 After the withdrawal of Susan Rice, attention now shifts to the prospect of Secretary of State John Kerry.

Kerry, chairman of the Senate Foreign Relations Committee, has been considered a leading contender for the post along with Rice.

With current Secretary of State Hillary Rodham Clinton set to retire soon, President Obama is looking at a revamp of his national security headed into his second term.

The CIA slot is open — thanks to the David Petraeus sex scandal — and there are reports that Defense Secretary Leon Panetta may retire sooner rather than later. Former senator Chuck Hagel is said to be in line for the next Pentagon opening.

As for secretary of State, Rice announced Thursday that she is dropping out of the race. Senate Republicans had criticized her for comments after the Sept. 11 attack on the U.S. consulate in Benghazi, Libya, setting up the prospect of a tough Senate confirmation fight that Rice cited in her withdrawal letter to Obama.

That would seem to open the door for Kerry. Obama’s team hasn’t said much about second term personnel openings, so there could be a mystery candidate who has received less attention (national security adviser Tom Donilon, perhaps?).

It was Kerry who picked Obama, then an Illinois legislator seeking a U.S. Senate seat, to give the keynote address at the 2004 Democratic Convention. That speech launched Obama’s national political career.

When Obama sought the presidency in 2008, Kerry endorsed him at a key moment — after Obama lost the New Hampshire primary to Hillary Rodham Clinton.