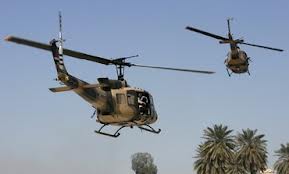 The United States has given six military helicopters to the Lebanese air force, a diplomatic source said on Wednesday, bolstering forces that have been struggling to deal with violence spreading over the border from Syria.

“Six Huey 2 helicopters have been delivered to Lebanon as part of bilateral military assistance,” the source said on condition of anonymity.

The air force has 24 U.S. Huey helicopters and 11 French-made Gazelles, both of which can be equipped with guns and missiles.

Lebanon, which is still rebuilding after its own 15-year civil war, has seen clashes between gunmen loyal to opposing sides in Syria’s civil war, mostly in the northern port town of Tripoli, but also in the capital Beirut and the southern coastal city of Sidon.

Few envision a fight between Lebanon and its much larger neighbor Syria, a country whose troops were garrisoned in Lebanon until 2005 and still has influence over the security services.

But Lebanon’s army is ill-equipped to deal with powerful internal militant groups, including the Shi’ite Muslim guerrilla and political movement Hezbollah, which the United States counts as a terrorist organization.