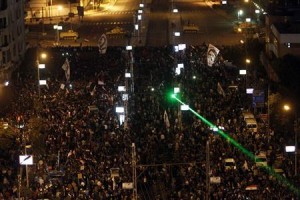 Tens of thousands of Egyptian protesters surged around President Mohamed Mursi’s palace in Cairo on Friday after breaking through barbed wire barricades and climbing onto army tanks guarding the premises.

“The people want the downfall of the regime” and “Leave, leave,” they chanted, using slogans used in the uprising that toppled Mursi’s predecessor Hosni Mubarak in February 2011.

Opposition leaders earlier rejected a national dialogue proposed by the Islamist president as a way out of a crisis that has polarized the nation and provoked deadly street clashes.

Elite Republican Guard units had ringed the palace with tanks and barbed wire on Thursday after a night of violence between Islamist supporters of Mursi and their opponents, in which seven people were killed and 350 wounded.

Islamists, who had obeyed a military order for demonstrators to leave the palace environs, held funerals on Friday at Cairo’s al-Azhar mosque for six Mursi partisans who were among the dead. “With our blood and souls, we sacrifice to Islam,” they chanted.

Mursi had offered few concessions in a speech late on Thursday, refusing to retract a November 22 decree in which he assumed sweeping powers or cancel a referendum next week on a constitution newly drafted by an Islamist-dominated assembly.

Instead, he called for a dialogue at his office on Saturday to chart a way forward for Egypt after the referendum, an idea that liberal, leftist and other opposition leaders rebuffed.

They have demanded that Mursi rescind the decree in which he temporarily shielded his decisions from judicial review and that he postpone the December 15 referendum before any talks begin.

A leader of the main opposition coalition said it would not join Mursi’s dialogue: “The National Salvation Front is not taking part in the dialogue,” said Ahmed Said, a leader of the coalition, who also heads the liberal Free Egyptians Party.

The Front’s coordinator, Mohamed ElBaradei, a Nobel peace laureate, urged “national forces” to shun what he called an offer based on “arm-twisting and imposition of a fait accompli”.

Murad Ali, spokesman of the Brotherhood’s Freedom and Justice Party (FJP), said opposition reactions were sad: “What exit to this crisis do they have other than dialogue?” he asked.

Mursi’s decree giving himself extra powers sparked the worst political crisis since he took office in June and set off renewed unrest that is dimming Egypt’s hopes of stability and economic recovery after nearly two years of turmoil following the overthrow of Mubarak, a military-backed strongman.

The turmoil has exposed contrasting visions for Egypt, one held by Islamists, who were suppressed for decades by the army, and another by their rivals, who fear religious conservatives want to squeeze out other voices and restrict social freedoms.

Caught in the middle are many of Egypt’s 83 million people who are desperate for an end to political turbulence threatening their precarious livelihoods in an economy under severe strain.

“We are so tired, by God,” said Mohamed Ali, a laborer. “I did not vote for Mursi nor anyone else. I only care about bringing food to my family, but I haven’t had work for a week.”

A long political standoff will make it harder for Mursi’s government to tackle the crushing budget deficit and stave off a balance of payments crisis. Austerity measures, especially cuts in costly fuel subsidies, seem inevitable to meet the terms of a $4.8-billion IMF loan that Egypt hopes to clinch this month.

U.S. President Barack Obama told Mursi on Thursday of his “deep concern” about casualties in this week’s clashes and said “dialogue should occur without preconditions”..

The upheaval in the most populous Arab nation worries the United States, which has given billions of dollars in military and other aid since Egypt made peace with Israel in 1979.

Said, the leader of the Free Egyptians Party, accused Mursi of ignoring all the opposition’s demands in his “shocking” speech on Thursday and of fixing the dialogue agenda in advance.

Ayman Mohamed, 29, a protester at the palace, said Mursi should scrap the draft constitution and heed popular demands.

“He is the president of the republic. He can’t just work for the Muslim Brotherhood,” Mohamed said of the eight-decade-old Islamist movement that propelled Mursi from obscurity to power.

The Muslim Brotherhood’s spokesman, Mahmoud Ghozlan, told Reuters that if the opposition shunned the dialogue “it shows that their intention is to remove Mursi from the presidency and not to cancel the decree or the constitution as they claim”.

The conflict between Islamists and opponents who each believe the other is twisting the democratic rules to thwart them has poisoned the political atmosphere in Egypt.

“Is this an environment for people to say ‘yes’ or ‘no’ to a document that is going to divide them rather than unite them?” Said asked, referring to the planned vote on the constitution.

Voting for Egyptians abroad starts on Saturday, a week before the ballot in the country itself, the Egyptian Foreign Ministry said on its official Facebook page.