The Church of England Votes Against Women Bishops 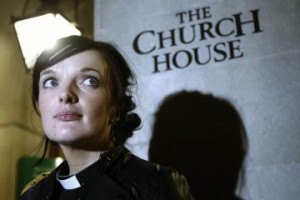 With many hoping to smash the stained glass ceiling, the Church of England voted over allowing women to serve as bishops on November 20. But the ceiling remains intact, as the vote failed to pass and the outcome could have major implications for the Church’s future.

The Church’s legislative body, known as the General Synod, made the decision late Tuesday afternoon. After a long day filled with dozens of speeches by various members of the Synod’s three elected houses – one each for clergy, bishops and lay people – at Church House in Westminster, London, the measure was put to a vote. It needed a two-thirds majority from each of the Synod’s houses to pass, but fell short by just six votes from lay-members.

For years, there has been a strong push to allow women to become bishops in the Church, which opened its doors to women priests back in 1992. Women bishops are already common in the Anglican churches in Canada, the U.S. and Australia and many in Britain were shocked at the Synod’s decision, which was widely expected to go the other way. Reverend George Pitcher, an Anglican priest at London’s St. Bride’s, was stunned by the vote, saying that it could cause “chaos in the Church of England.” The decision was also a blow to both the outgoing Archbishop of Canterbury, Dr. Rowan Williams, who has long supported the move, as well as the incoming Archbishop, Justin Welby, who endorsed women bishops in his first address from Lambeth Palace just two weeks ago. “I will be voting in favor,” Welby told a group of reporters on Nov. 9. “And join my voice to many others in urging the Synod to go forward with this change.”

Though it’s not the most divisive issue facing the wider, worldwide Anglican community – that would be the question of gay marriage – ordaining women bishops has caused serious conflict within the Church of England for years now. According to Pitcher, the Church is divided between reformers who want to see the Church evolve and conservatives who are against the Church of England becoming a “mainstream, liberal, Episcopal—as in the States—type of Church.” Traditionalist members and clergy have been especially firm in their views that only men should serve in the role of bishops, believing it to be scripturally sound. “We accept that there are different interpretations of the scriptures,” Jane Patterson, a member of the conservative evangelical group Reform, told the Guardian, “but the church needs to guard against placing society’s views over what we see as God’s views, as expressed in his written word, the Bible.”

Meanwhile, others believe allowing women bishops is not only the right thing to do, but also the necessary thing to do to keep pace with modern England. The Church has been bleeding members for a number of years, with reports from the Research and Statistics Department of the Archbishops’ Council for 2010 showing that less than 2% of Britons attend regular services. And the Church’s latest move isn’t likely to register well with the average citizen; a July poll showed that 74% of Brits thought the Church of England should allow women bishops. “Theology doesn’t exist in a vacuum,” Jan McFarlane, the Archdeacon of Norwich, pointed out during her speech to the Synod on Tuesday. “A church so out of step with the world around us becomes an irrelevance.”

Incidentally, even some advocates of women bishops weren’t fully supportive of Tuesday’s measure anyway, as it included a clause allowing individual traditionalist parishes to opt for a stand-in male bishop to oversee a women bishop. The clause was an attempt to placate inflexible opponents of women bishops, but it obviously wasn’t enough to win over everyone. After the measure was rejected on Tuesday, Archbishop Williams expressed his sadness over the decision and added that “this vote of course isn’t the end of the story. This is not an issue that is going to go away.” Which, unfortunately, was the one conclusion that the entire Church of England was hoping for.