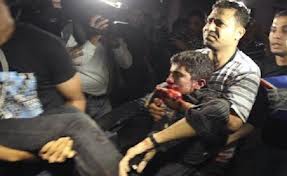 Two cameramen working for al-Aqsa TV and an educational programming director for the al-Quds channel, both affiliated with Gaza’s Hamas government, were killed by Israeli air strikes on their cars on Tuesday.

The cameramen were killed in their car not far from the main Shifa hospital in Gaza city. The al-Quds programme director was killed in his car in the central Gaza Strip.

Their deaths have sparked outrage among Gaza’s press corps and also from Hamas, which accused Israel of trying to suppress coverage of Israeli attacks in the coastal enclave.

“The Israeli aggressors want to cut the picture and silence the voice of the brave people of Gaza. Journalism in Gaza plays a major, effective role in exposing the enemy’s crimes to the world,” Hamas spokesman Fawzi Barhoum told a news conference.

For its part, Israel says it takes pains only to strike combatants and warns civilians away from its strikes, which have killed over 125 Palestinians in six days of fighting, around half of them civilians, including around 30 children.

“The terrorists use schools, mosques, the media and even their own kids as human shields,” Israel army spokesman Arye Shalicar told Reuters.

“Every time we target a site, and we have hit more than 1400 targets, we try to have nearly 100 percent certainty about where and what the target is, so that we only strike the terrorists,” he said.

Four Israelis have been killed by hundreds of rocket salvos fired into Israel by Gaza-based militants.

A tower block housing many of Gaza’s local and international media offices has twice been bombed by Israeli planes in recent days, in attacks Israel said targeted the communications infrastructure and personnel of militant groups.

Travelling down a laser-straight path toward the building on Monday, three Israeli missiles burst into earth-shaking fireballs, killing a cyber warfare operative from the militant Islamic Jihad group and wounding six others.

Tenants of the building, which include Britain’s Sky News and Saudi-owned Al Arabiya, said they did not realise militants also occupied the non-descript office targeted.

“Israel should respect its obligations under international law and immediately halt its attacks against news media offices,” Sherif Mansour of the Committee to Protect Journalists said in a statement on Monday.

“Authorities know these buildings are home to numerous news organisations whose employees are civilians protected by international law,” he said.