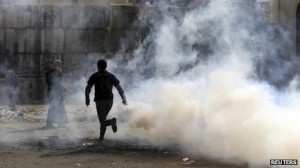 At least 76 people have been injured in clashes between protesters and police in the Egyptian capital, Cairo, health officials say.

Demonstrations began on Monday on the first anniversary of street battles that left more than 40 people dead, and continued late into Tuesday evening.

Protesters threw stones and petrol bombs, and police fired back with tear gas and birdshot.

One wounded protester was on a life support machine.

The clashes began on Monday when demonstrators attempted to remove concrete barriers that have sealed off roads to the interior ministry since last year.

Among those injured were a number of policemen. Security officials said they had arrested 19 people.

Last November’s clashes became known as the “Mohamed Mahmoud events” after the street near Tahrir Square on which they were centred.

Those clashes began after security forces dispersed a sit-in organised by the families of those killed during the uprising that toppled former President Hosni Mubarak in early 2011.

The unrest lasted for six days and was marked by the particularly fierce tactics used by riot police.

It came as protesters pushed for Egypt’s then-military rulers to hand over power.