“We must not take the treacherous road of changing flags and banners,” he said.

Beneath a 20ft-tall hammer and sickle at the Great Hall of the People, Mr Hu gave a glowing appraisal of his time in office and stamped out a path for his successor, Xi Jinping, to follow.

“The whole Party should have every confidence in our path, in our theories and in our system,” he said, adding that the Party “must” embrace his guiding ideology “for a long time”.

It was a show of continuity in pointed contrast to the democratic swings of the West, whose political system, Mr Hu vowed,  China  would “never copy”.

Ahead of the Congress, there had been hopes in China that Mr Xi’s arrival in office would usher in a different era.

However, those hopes evaporated during a near two-hour address in which Mr Hu, 69, trumpeted the “epic accomplishments” and “superiority” of Chinese socialism and offered no hint of any change of policy.

“I listened with concentration but I did not hear anything new,” said Chen Ziming, a liberal commentator who was arrested after the Tiananmen Square protests in 1989.

“I knew there would not be many big changes, but I was still hoping for some small things at least, but sadly there was no sign even of that,” he added. 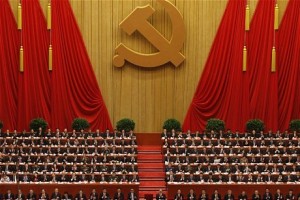 Qian Gang, the former managing editor of southern Weekend, one of China’s most pioneering newspapers, wrote in a blog after analysing the language of Mr Hu’s speech that “conservative forces within the Party are still very powerful”.

He added: “There is very little prospect that substantive moves will be made on political reform”.

Mr Hu’s speech, technically the “political report” of the last five years, was drafted over the course of nearly a year by several committees and more than 4,500 Party members were consulted for their views.

Mr Xi was put in charge of the project, which suggests that the speech also reflects his views.

“It is no exaggeration to say it is a crystallisation of the views of the entire Party” said Cai Mingzhao, a senior propaganda official.

Meanwhile, the Party’s old guard were pleased that the Congress began with a moment of silence for a group of Chinese communism’s founding fathers, including Mao Tse-tung, Zhou Enlai and Liu Shaoqi.

“It was a good decision to have the show of silent mourning,” said Fan Jinggang, the founder of Utopia, a neo-Maoist internet forum. “I was really surprised when I saw it.”

In a sign of how Party elders continue to wield enormous power over Chinese politics, 86-year-old former President Jiang Zemin, was front and centre as the Congress opened, sitting next to Mr Hu and appearing frequently on a big video screen.

Mr Jiang, who was rumoured to be near death last year, has worked assiduously to manipulate his proteges into the new line-up of Chinese leaders, according to several sources.

Since coming to power in 1949, the Communist Party had “rescued” China, Mr Hu said, transforming a “poor and weak” nation into “an increasingly prosperous and powerful new China.”

He said the Party would deliver more wealth for China’s citizens, restating a promise to double the average wage by 2020, to narrow the yawning wealth gap, and to improve the lot of farmers.

For the first time, he also spoke at length about the environment, devoting an entire section of his speech to conservation and ecology.

The speech also reflected China’s growing confidence, both at home and on the world stage.

In a change from his report five years ago, when he said China had to be integrated into the world, Mr Hu said yesterday that China would firmly defend its sovereignty and “never yield to any outside pressure”.

In addition, a vow from 2007 that China “does not engage in arms races or pose a military threat to any other country” was conspicuously absent.

The Party will unveil its new leadership next Wednesday or Thursday.