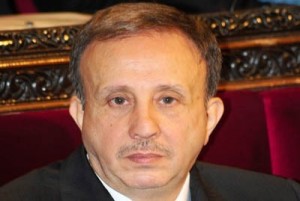 BEIRUT, Lebanon — The brother of Syria’s speaker of Parliament was assassinated on Tuesday in a central Damascus neighborhood, the official Syrian news agency reported, as clashes between the government and the rebels convulsed most major cities.

Mohammad Osama al-Laham was killed by gunmen who opened fire on his car in the Midan neighborhood of the capital while he was on his way to work, SANA reported, blaming the attack on “terrorists,” its uniform description of all anti-government rebels.

It said Mr. Laham, the brother of Jihad Laham, the speaker of the People’s Assembly, held a doctorate in agriculture and blamed his death on an attempt by the rebels to eliminate people with skills the country needs.

The assassination came just one day after the funeral of Mohamed Rafeh, 30, a television star who was abducted and killed, apparently by government opponents, over the weekend.

Mr. Rafeh had been outspoken in his support for the fierce government suppression of its armed opponents as a peaceful protest movement descended into civil war. An online statement from a rebel faction accused him of being a government informant.

Both government and rebel reports detailed clashes in virtually every major urban area on Tuesday, continuing what had already been described as some of the worst violence in months.

The Local Coordinating Committees, a collection of activist organizations across Syria, said the daily toll on Monday reached at least 159, including 72 killed in Idlib, and 47 in Damascus and its suburbs.

People in Damascus, the capital, said the fighting was the fiercest they could remember since July, with thousands of people having fled as a Palestinian faction that supports the Assad government skirmished with government opponents in three southern neighborhoods.

“It’s a real war,” said an activist reached in southern Damascus via Skype, who used only one name, Eman, for her safety. “Explosions, bombing and gunfire, and of course the helicopters, which have become part of the sky in Damascus now, like birds,” she said.

“It’s a real war,” said an activist reached in southern Damascus via Skype, who used only one name, Eman, for her safety. “Explosions, bombing and gunfire, and of course the helicopters, which have become part of the sky in Damascus now, like birds,” she said.

The fighting, escalating since the weekend, ignited the quarters of Yarmouk and Tadamon, both heavily Palestinian, as well as Hajjar al-Aswad, a center of resistance to the government.

Syria took in large numbers of Palestinians who fled their homes at the founding of Israel, and they and their descendants number about 450,000 now. Many have sided with those leading the uprising, but the Popular Front for the Liberation of Palestine-General Command, a faction with a prominent role in the neighborhoods, still supports the government. Much of the fighting involved Popular Front units, backed by government artillery. Rounds fired from the military airfield in Mezze slammed into the area, activists said.

Yarmouk, founded as a Palestinian refugee camp in 1957, gradually became a residential district barely distinguishable from the rest of greater Damascus. A Facebook page focused on camp news published a statement from the Popular Front group saying it had thwarted an infiltration by government opponents.

“When the terrorists failed to enter, they fired mortars killing a large number of martyrs and wounding a lot of people,” the statement said.

Civilians have been fleeing in droves. Small artillery hit a minibus carrying people trying to escape from Yarmouk, killing five of them. Each side blamed the other for that strike.

Displaced families have started camping in back gardens or schoolyards, Eman said.

A car bomb exploded in Mezze 86, a Damascus neighborhood on the slopes below the official palace that houses the offices of President Bashar al-Assad. The area is heavily populated by families linked to the security forces, which Mr. Assad’s Alawite minority dominates. Pictures posted on Facebook showed a large black column of smoke rising from the area.

The Free Syrian Army claimed responsibility for that attack, saying in a statement that it targeted military officers and members of the armed militias who fight for the government.

The bomb, a booby-trapped car, exploded in Bride Square, killing at least 11 people and wounding more than 30, some of them critically, said the Syrian Observatory for Human Rights, which tracks the conflict from abroad.

The official news agency, SANA, also put the death toll at 11 but said at least 56 were injured. The explosion ignited other cars and caused widespread destruction, it said.

Accounts differed more sharply on another car bombing, outside a government-owned Rural Development Center near Hama. The rebels and activists reported that dozens of soldiers were killed; the government said just two civilians had died.

The Syrian Observatory said that Jabhet Al-Nusra — known as a jihadist organization — and other rebel groups in the region collaborated to explode a car bomb at a government checkpoint in a village near Hama, killing at least 50 soldiers. If true, that would make it one of the single deadliest anti-government attacks since the uprising started in March 2011.

The accounts from the observatory and rebel groups stated that the military had taken over the development center to house military units. Checkpoints in rural areas often serve as rudimentary bases for the government, with large numbers of men and equipment.

“They targeted one of the biggest checkpoints in the region,” said Ahmad Raadoun, a member of the Free Syrian Army in the Hama suburbs who was reached by Skype. “It’s a big building where the regime forces were headquartered.”

Mr. Raadoun said he was about 20 miles from the site, the village of Ziyara. He said the bomb caused extensive casualties and other damage.

The SANA account said a suicide bomber in a vehicle killed 2 civilians and wounded 10 others. The government routinely refers to rebels as terrorists and has repeatedly singled out the Jabhet group as a terrorist organization.

In its daily roundup of violence around the country, SANA also said that government forces clashed with “terrorists” in the eastern city of Deir al-Zour, and in Aleppo, in the north.

Activist organizations reported a number of airstrikes around the country, with the toll particularly high in the northern towns of Harem and Kafr Nabl, both near Idlib. Kafr Nabl has gained a reputation throughout the conflict for its savvy demonstrations. For instance, villagers often carry signs in English to attract international support.

But the mood was starkly different on Monday, with local activists saying that a government airstrike had killed at least 17 people and that more were buried under the rubble.

Video accounts cannot be independently confirmed, but three videos posted on Monday from Kafr Nabl all had similar scenes and the same people seen mourning over corpses covered with bloody blankets and tarpaulins.

“They’re gone! They’re gone!” shouted one middle-age man with white hair, seemingly distraught over the death of his two sons. “Where is Waleed? Where is he? I just want my kids, my two kids they are waiting for their mother to come.”

One extremely graphic video posted from Kafr Nabl, near Idlib, shows bloodied victims dumped into a truck in the aftermath of what was described as an aerial assault. A shot of the main street shows flames leaping from vehicles and residents running around in panic.

At the United Nations on Monday, a top relief official said the organization’s aid effort in Syria “is very dangerous and very difficult.” The official, John Ging, director of operations of the Office for the Coordination of Humanitarian Affairs, told reporters that the United Nations was supplying 1.5 million people in Syria with food and that nearly half was being delivered into areas of conflict, but “there are areas beyond our reach, particularly areas under opposition control for quite a long time.”

Photo: Mohammad Jihad Laham, the speaker of Syrian People’s Assembly. His brother Mohammad Osama al-Laham was killed by gunmen who opened fire on his car in the Midan neighborhood of Damascus