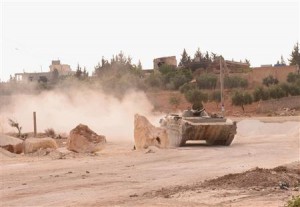 The Syrian army abandoned its last base near the northern town of Saraqeb after a fierce assault by rebels, further isolating the strategically important second city Aleppo from the capital.

But in a political setback to forces battling to topple President Bashar al-Assad, the United Nations said the rebels appeared to have committed a war crime after seizing the base.

The opposition Syrian Observatory for Human Rights said on Friday government troops had retreated from a post northwest of Saraqeb, leaving the town and surrounding areas “completely outside the control of regime forces”.

It was not immediately possible to verify the reported army withdrawal. Authorities restrict journalists’ access in Syria and state media made no reference to Saraqeb.

The pullout followed coordinated rebel attacks on Thursday against three military posts around Saraqeb, 50 km (30 miles) southwest of Aleppo, in which 28 soldiers were killed.

Several were shown in video footage being shot after they had surrendered.

“The allegations are that these were soldiers who were no longer combatants. And therefore, at this point it looks very likely that this is a war crime, another one,” U.N. human rights spokesman Rupert Colville said in Geneva.

“Unfortunately this could be just the latest in a string of documented summary executions by opposition factions as well as by government forces and groups affiliated with them, such as the shabbiha (pro-government militia),” he said.

Video footage of the killings showed rebels berating the captured men, calling them “Assad’s dogs”, before firing round after round into their bodies as they lay on the ground.

Rights groups and the United Nations say rebels and forces loyal to President Bashar al-Assad have committed war crimes during the 19-month-old conflict. It began with protests against Assad and has spiraled into a civil war which has killed 32,000 people and threatens to drag in regional powers.

The mainly Sunni Muslim rebels are supported by Sunni states including Saudi Arabia, Qatar and neighboring Turkey. Shi’ite Iran remains the strongest regional supporter of Assad, who is from the Alawite faith which is an offshoot of Shi’ite Islam.

Saraqeb lies at the meeting point of Syria’s main north-south highway, linking Aleppo with Damascus, and another road connecting Aleppo to the Mediterranean port of Latakia.

With areas of rural Aleppo and border crossings to Turkey already under rebel control, the loss of Saraqeb would leave Aleppo city further cut off from Assad’s Damascus powerbase.

Any convoys using the highways from Damascus or the Mediterranean city of Latakia would be vulnerable to rebel attack. This would force the army to use smaller rural roads or send supplies on a dangerous route from Al-Raqqa in the east, according to the Observatory’s director, Rami Abdelrahman.

In response to the rebels’ territorial gains, Assad has stepped up air strikes against opposition strongholds, launching some of the heaviest raids so far against working class suburbs east of Damascus over the last week.

In the latest in a string of fruitless international initiatives, China called on Thursday for a phased, region-by-region ceasefire and the setting up of a transitional governing body – an idea which opposition leaders hope to flesh out at a meeting in Qatar next week.

His plan, called the Syrian National Initiative, calls for four bodies to be established: the Initiative Body, including political groups, local councils, national figures and rebel forces; a Supreme Military Council; a Judicial Committee and a transitional government made up of technocrats.

The initiative has the support of Washington. U.S. Secretary of State Hillary Clinton called on Wednesday for an overhaul of the opposition, saying it was time to move beyond the troubled Syrian National Council.

The SNC has failed to win recognition as the legitimate representative of the Syrian people and Clinton said it was time to bring in “those on the front lines fighting and dying”.