Violence against Christians could result in mass emigration 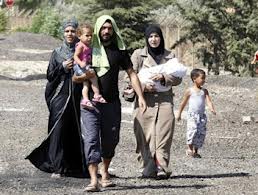 The recent deadly attacks on residents in the Beirut and Damascus Christian districts have sparked a warning by a Maronite Christian bishop of a massive wave of Christian refugees heading for Europe and the US.

Bishop Maroun Nasser Gemayel was reported in the Aid to the Church in Need (ACN) publication as saying that Middle Eastern Christians were desperate for security and freedom. He continued that the violence against them in their homelands could result in mass migration to the US and Europe in spite of the peoples’ love for their countries of birth.

Bishop Gemayel referred to the current situation in Damascus as dramatic, adding that Christians in Beirut are beginning to believe they can no longer live in safety, even in their own enclaves. The anti-Christian attacks which took place last Friday in Beirut and on Sunday in Damascus killed a total of 18 people and injured over 100, and are seen as a major setback for the minority Maronite and other Christian communities in the region.

The bishop, recently appointed by the Pope to head up the Maronite community, said that facilities are being set up by the church to accommodate the expected refugees. At the present time, over 80,000 Maronites are living in exile in Europe, with the bishop stating it is his responsibility to keep alive the Church of Antioch, one of Christianity’s oldest sects, as well as uniting the Lebanese Christians scattered across Europe.

ACN is at present supporting a number of Christian groups involved in projects in Syria and Lebanon since civil war broke out. The charity is also helping refugees from Syria and Iraq who have fled to the Lebanon and are destitute after escaping with only their lives.

According to the United Nations, Lebanon is now the third regional country with a population of registered Syrian refugees and those awaiting registration exceeding the 100,000 mark. Turkey has a similar number, and Egyptian officials claim as many as 150,000, most of whom are unregistered.