Hurricane Sandy pulled away from the Bahamas on Saturday after killing at least 41 people in the Caribbean, beginning a slow march toward the U.S. East Coast where it threatens to hit as one of the worst storms in decades.

The late-season storm has been dubbed “Frankenstorm” by some weather watchers because it will combine elements of a tropical cyclone and a winter storm. Forecast models show it will have all of the ingredients to morph into a massive and potentially catastrophic “super storm.”

Governors in states along the U.S. East Coast declared states of emergency on Friday, and officials urged residents to stock up on food, water and batteries in the event the storm develops as forecast.

The U.S. Navy ordered all ships in the Norfolk, Virginia, area, including a nuclear-powered aircraft carrier, out to sea to ride out the approaching storm.

“We’re expecting a large, large storm,” said Louis Uccellini, director of the National Oceanic and Atmospheric Administration’s Center for Environmental Prediction. “The circulation of this storm as it approaches the coast could cover about the eastern third of the United States.”

Sandy, a Category 1 hurricane, battered the Bahamas southeast of Florida on Friday after causing at least 41 deaths across the Caribbean. The storm was expected to crawl northward on Saturday and Sunday and then turn inland toward the U.S. coast. 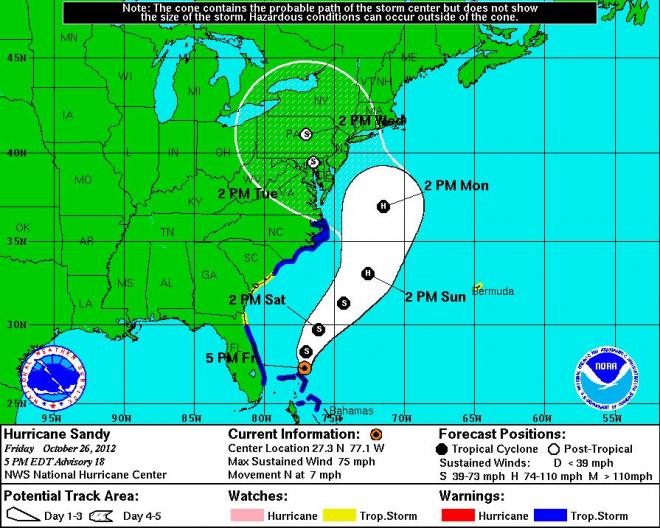 The storm packs the potential to cause widespread power outages and unleash flooding and even dump snow as far inland as West Virginia. It also threatens to disrupt air travel all along the U.S. East Coast.

It was moving slowly over the Atlantic at 7 mph, the U.S. National Hurricane Center said.

Sandy was forecast to weaken to a tropical storm before strengthening into a Category 1 hurricane over open water on Sunday.

The storm, coming in the final weeks before the U.S. presidential election on November 6, was presenting a challenge to the campaigns of U.S. President Barack Obama and Republican challenger Mitt Romney.

Ahead of the election, millions of Americans are taking advantage of early voting arrangements to cast their ballots. State officials said they had put in place contingency plans in case Sandy caused extended power outages or other problems that could disrupt voting.

In New York City, officials were considering shutting down the country’s largest mass transit system, worried the storm’s impact could cause flooding or high winds that would endanger subways and buses.

Much of Florida’s northeast coast was under a tropical storm warning and storm watches extended up the coast through South Carolina.

Along North Carolina’s Outer Banks, which jut out into the Atlantic, vacationers in large camper trailers and motor homes streamed off the barrier islands.

Many forecasters are warning that Sandy could be more destructive than last year’s Hurricane Irene, which caused billions of dollars in damage across the U.S. Northeast.