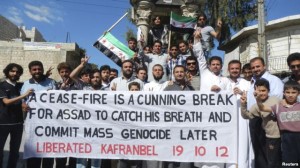 A Syrian rights group says government warplanes have attacked a strategic rebel-held northern town in the latest setback to international efforts to secure a cease-fire during a Muslim holiday that begins this week.

The Observatory also said Syrian rebels battled government forces holed up in a nearby military base that has been under a rebel siege for days.

The rights group said neither government nor rebel forces appear to be making any preparations to adopt a cease-fire during the Eid al-Adha holiday that begins Friday, as proposed by international peace envoy Lakhdar Brahimi.

The envoy ended a four-day visit to Damascus on Tuesday without winning a public commitment to the truce from the government. Syrian opposition and rebel leaders also have expressed skepticism about a truce.

U.N. peacekeeping chief Herve Ladsous said he is making preparations for a Syria peacekeeping force if a cease-fire takes hold. But he said it is premature to discuss the details.

The Syrian government has made numerous amnesty offers since an opposition uprising began in March 2011, typically stipulating that the pardons do not cover those who took part in killings.

In other developments Tuesday, Turkish media said a Syrian anti-aircraft shell hit a Turkish health center in Hatay province near the Syrian border, but caused no casualties. Turkey has fired back at Syria several times in recent weeks after previous cases of Syrian fire landing on the Turkish side of the border.

Meanwhile, the U.N. refugee agency said Lebanon has become the third country in the region to host more than 100,000 registered refugees from the Syrian civil war. The UNHCR previously reported more than 100,000 Syrian refugees in both Turkey and Jordan.

UNHCR spokeswoman Melissa Fleming said recent unrest in Lebanon has temporarily disrupted the agency’s operations in the country, including the registration of Syrian refugees in Tripoli, Akar, Beirut and Sidon in southern Lebanon.

“Just to note what the refugees tell us in Lebanon,” she said. “As you know, none of them are living in refugee camps. They are living in local communities and they are struggling to make ends meet because they do live on the open economy.

“And, they complain of high prices,” she said. “We are trying to help them through the provision of assistance depending on their circumstance. But, that is a common complaint, a common concern in Lebanon.”

About 1.5 million people are displaced inside Syria. The U.N. refugee agency says the displaced live in sub-standard public shelters and many do not receive essential aid because of security constraints.